This Production is using five couples in addition to the Baron and Baroness for the Bombie Samba routine.  I believe the guys are wearing black tux outfits.   My instructions were to continue the red/black theme, and to give the girls hi-low skirts to accommodate the choreography.

I opted to dress all the chorus dancers in black with red highlights.  I had a number of reasons for this.  The first is that reds vary, and true lipsitck red can be hard to find, the typical “bridesmaid red” is a darker color–more of a garnet or brick red.  The second is that my access to the choreographer was limited/non-existent.  As I thought about the look of the scene, I would have wanted the black and red dresses alternating to make the on-stage “picture” balanced, and doing that would have been difficult.  And lastly, I really liked the idea of the Baroness (and Baron–although I didn’t know I would be making his costume at this point in the decision-making) standing out against the other cast members.

I began with a little black dress: 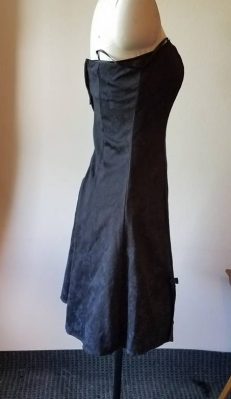 This dress was strapless, with a zip back.  It had two super cute little slits in the front that were decorated with bows and that let the lace trimmed net underskirt peep out.

So, even though I bought the dress because of the cute skirt details, the first thing I did (after cutting out the net underskirt) was to cut them off.  Go figure!

I wanted the skirt to be fuller than this, and I hope they do some fun twirly stuff in their dance routine.  I decided to insert some gores of black fabric into the back.  I planned for the center back and the two mid-back seams.  I measured up as far as I wanted the gores to go.  Then, I maximized the width that I had available, and cut out the largest gore that I could.

After inserting the gores, I used two tablerunners and gathered them to the bottom of the skirt.  I wanted the front to be shorter, so I cut a wedge out of the one of them for the center front.

I like tablerunners because they can be quite economical, and all of the edges are finished.  I stitched the two tablerunners together and then divided the skirt and the ruffle piece into 8ths (and may have further subdivided as I went to make the sections manageable) and squish-gathered the runner to the bottom of the skirt.  I obviously did not have my gathers equal, and as you can see below, I have one section that is hanging incorrectly.  However, before I had put the dress back on the dress form I had added all of the rows of lace and sequins to the ruffle and the bottom edge of the skirt.

The section that is pulling oddly must not have had enough gathers for it to hang straight, especially as the satin was quite heavy. 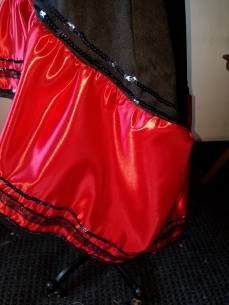 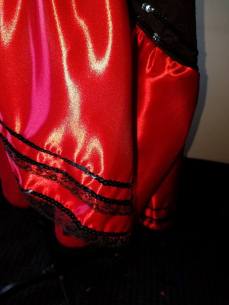 This annoys me greatly every time I look at it, however, I am *hoping* it will be OK when the dress is moving and on-stage.  If it looks odd,  part of the ruffle will need to be removed and then re-gathered and re-stitched.

The gores add a lot of ruffle to the back of the skirt, and I really hope that when the dress is worn if there is twirling it will move nicely.  This is when I really miss my daughter to be my living mannequin.  I can spin my dress form . . . but it just isn’t the same. 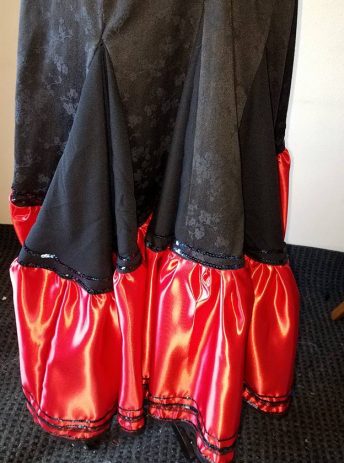 After the dress was done, I rather wished that I had inserted the gores in the side seams and center back, instead of the three back seams.  I also could have put a large one in the back and then four half-size ones in the other locations, for a more distributed fullness.

I wanted to use the removed underskirt as decoration for the top. The next picture gives an idea of how I “rough draft” how something will look.  I like to pin things to the dress form, and then back away and look at it . . . looking more for shape, balance and visual appeal than actually worrying about the design/construction specifics.  I used the cut-off wedge from the skirt as my color placeholder, but decided it would work for the actual dress.

I took the wedge and make a casing along the long straight edge to run elastic through.  I stitched the removed net underskirt to the other edge. 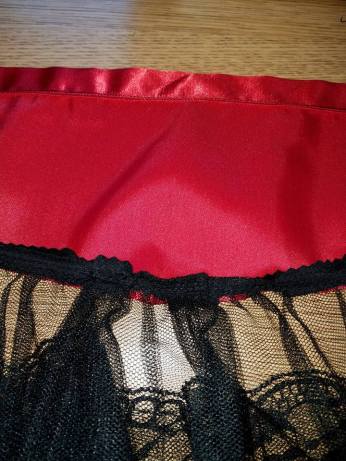 I stitched it to the center back and center front, and pinned a black satin flower to the center, and called it “good “.  The dress can be worn with the shoulders up or down. 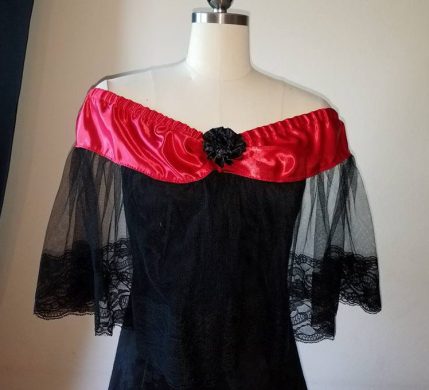 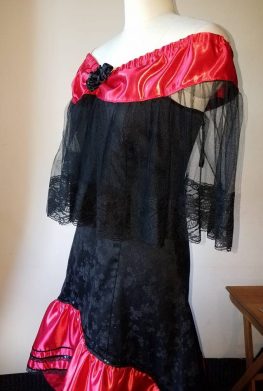 I like the fullness and shape of the skirt from the side and back, I just wish the front had a bit “more”.  In addition to the shifting of the gores, I could have shifted extra fullness to the front, or added in some additional fabric.

Cost:  Dress $3, tablerunners, about $1 each, plus lace, string sequins and elastic.