Dressing Ella is a huge part of “Cinderella”.  One of the first decisions that needs to be made, before just about anything else, what to do about the Transforming Costumes.

Broadway Cinderella has three major and one minor transformation costume–and three of those belong to Ella.  Ella transforms from her peasant outfit to her white ball gown, and later from a pink dress to a gold dress.  She also can have a disappearing cape.  These costumes are hard to find as rentals (I only found one company, they quoted $150/each, with a 25 costume minimum rental).  So . . .that leaves making them.

We spent HOURS searching the internet for tutorials and studying Youtube videos from Broadway and other creative costume designers.    We ended up making four different versions of the outfits (plus many modifications), over a course of three months, ending with our final tweaks the weekend before the show.  I was fortunate enough to have an extremely dedicated, inventive and endlessly resourceful volunteer who did the majority of the work.  The majority of these costumes, and their mutliple alterations and tweaks were done by my friend Cindy.  So, when I say “we”, it is a pretty loose term, and mostly means “she”.

Over the course of a series of posts, I will describe what we did, what we learned and what we recommend for anyone else trying to do this.  I have a few ideas for upgrades, and I hope to make some new costumes over the summer to try them out.  Without the pressure of a looming show date, it should be more fun!  Creativity and new ideas often come from the process of DOING and learning where the problem areas are.  Cindy and I learned many things NOT to do, and I think the sharing of them is just as important as what was successful.  We hope that other people can learn from our mistakes. What works in the sewing room does not always translate to working on stage.

I took many pictures along the way, and we have video of the performances (and some bloopers, as well).  As I thought about how to write these posts, I realized I needed more detailed pictures of the actual process of dressing during the show, because that is what will make or break the success of the costumes.  I recently met with the four girls who actually DID the costumes during the show for a photo and video session.  We were a little rusty three weeks later, but we got the job done.

I started by creating the videos, and I will continue to work on the actual posts.  If the transformation you are looking for is not here, come back, or sign up for notifications, and it will hopefully be here soon.

Here are Act I transformations for Ella.  This includes the change into the upgraded  Ball Gown.  (Marie’s transformation will come in an upcoming video and post).

The posts that follow this will include pictures of the costume pieces, and evaluation of what worked and what didn’t, discussion of the change process and ideas for improvements.

I hope these posts help you create your own magical world of Cinderella. 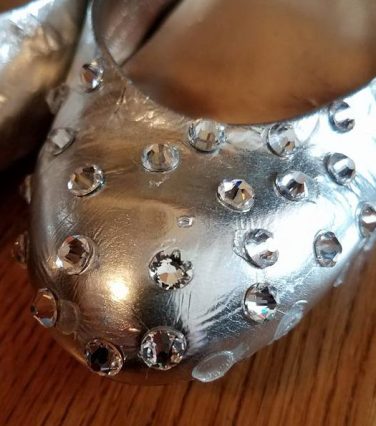