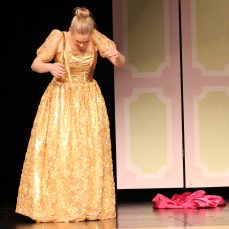 Could this dress be other colors?  Probably.  We chose pink because Gabrielle’s color is pink, however, there is no reference in the show to support this.  The gold dress could also probably be a different color.  Marie says a little chant ending with “Tatters that matter and rags, Spin them into gold”.  However, “gold” could also mean something precious or valuable, and is a very fleeting reference.  The script stage directions indicate: “Ella throws the rags into the air.  As they land, her torn gown has transformed into something golden and stunning”.  No small task for the costumer there!  Later, Gabrielle says to Ella “I won’t even ask about the gold dress”.  This could easily be changed, or just the word “gold” omitted.

This scene requires:  a dress for Gabrielle, a matching transforming dress for Ella and a gold dress for Ella.  If you are particularly clever in your costume design, and your cast members are about the same size, you could possibly use the same dress.  The costume change for Ella is fairly short.  You could gain a bit of time by trying to slow down the dialogue between Gabrielle and Jean-Michael.  My cast members were pretty rapid-fire in their lines.  You will also need to either design the transforming costume so that it is easy to put on in the dark, or make sure there is a way for the dressers to see what they are doing backstage.  Finding tiny snaps in the dark proved to be a problem for us.  We also had to shoo the rest of the cast out of the backstage area until this costume change was done.  As they were gathering for the Banquet scene,  they were fairly oblivious to the difficulties Ella and her dressers were having. Once we pointed this out, things improved, and they were able to get her back out on stage in a timely manner.

As I have mentioned previously in the “Dressing Ella” series, our costumes were the result of a series of revisions and “try again” efforts.  As a result, they probably had more pieces than if we “had-known-then-what-we-know-now”.   I had also chosen satin for these costumes, and the original transforming costumes were the “tuck the skirt up inside the bodice” version.  This is an example of the costume below you can watch here. 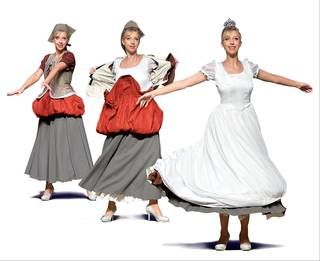 This method did not work well for us.  First, we did not like the look and shape of the bundled skirt.  Second, we used the side and shoulder snap method and were not able to close the snaps tight enough to give her the silhouette we wanted.  Third, the slippery fabric did NOT cooperate and stay tucked up under the bodice.   Fourth, the gold dress was too heavy and wanted to “escape”, and lastly, we didn’t have enough time back-stage to get the costumes changed and prepped.

In retrospect, we believe this sort of transforming skirt would work best if the “overskirt” were attached to the skirt that will be dropped. We ran into trouble with the weight of the gold skirt and how it bunched and pulled on the pink satin.  The open-down-the-front version probably also works better as it could be made to fit tighter and would hold the skirt up inside better.  Lining the bodice with something non-slippery, or having something silicon based  (non-slip slipper bottom fabric?) might help also.

As you are designing your dresses, make sure the the gold dress will be completely covered by the pink bodice.  That seems self-evident, but it is easy to overlook.  If it will be covered by the peasant outfit, this too, needs to cover both of the bodices AND any thinner fabric (ie the blouse/sleeves) will need to be thick enough that the pink dress does not show through.  If your peasant outfit will go over the top of these dresses, it will need to be big enough to do that.  Above all–start early.  In the end, we managed to get her onstage and looking good, but, if we had started sooner, we could have practiced more, and could have tweaked what she wore when.  As it was, we totally ran out of time and were playing beat-the-clock to get this transformation on-stage and working.

Lots of “if we were doing this again” thoughts, but, at the time, this is what we did:

Gabrielle wore a one piece zip back dress.  She had a small petticoat net ruffle that she wore under the peplum to give it a little extra added poof so that it looked more like the one Ella put on. 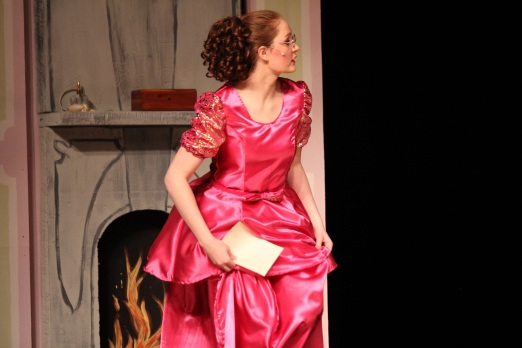 The sleeves were made with a fabric with a gold metallic pattern.  This was a really fortuitous pick on the part of the volunteer who made these costumes.  If, by chance, part of the gold on the sleeves or the straps showed through, it blended nicely with the sleeves.

The shape was designed to mimic the shape of the transforming costume.  The costume was a bit loose, but, even people who knew this was a transforming outfit weren’t sure if this was actually IT, since they imagined that Gabrielle’s dress would not fit Ella well.

We found that we needed to pre-set the pink and gold dress after Ella sings in the “Lonliness of Evening” and prior to the Banquet Dress scene (Act 2, Scene 5).  In retrospect, we could possibly have left the gold dress off, but, doing it all at once just made it easier (although with three dresses layered top of each other Ella was quite hot onstage).

The Transforming Pink dress consisted of a tear away skirt and a snap together top.

The skirt was basically just a skirt that snapped together on one side seam.  Initially, the skirt had a separate waistband and also snapped to that.  The top of the skirt itself was bound with some bias tape for strength.  As we rehearsed, we found we didn’t need the waistband, and so she just put the skirt on without.  When Madame came to tear the dress of Ella, she pulled on it, the snaps open, and it torn apart. 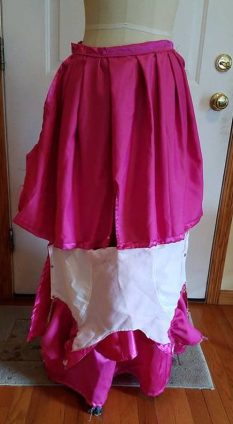 The bodice was brought up and snapped at the shoulders and side seams. 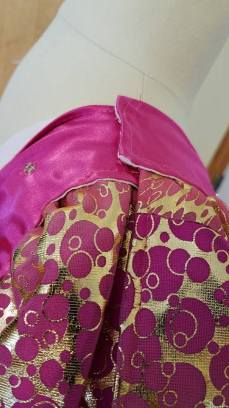 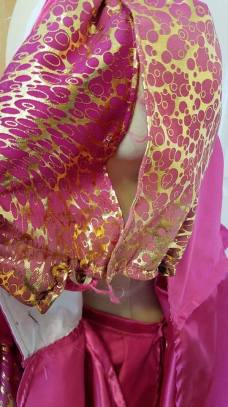 The skirt formed a “pouch” that held the gold dress in place.

This dress had a peplum that covered the pouch and hid any gaps or the gold dress peaking out.  The peplum also hid the pouch and hopefully made the pending transformation less obvious.

To help hold everything in place, the dress had a waist “band”.  This had a bit of elastic in the back to give it flexibility.  The bow in the front closed with a snap and Ella could undo this before she transformed.

It also had some ruffles on the shoulders for Madame to pull off.  Gabrielle’s dress did not have them.  One of those last-minute things.  The ruffles were attached by snaps, and one show when the ruffle pulled off the shoulder came unsnapped.  In retrospect magnetic fasteners, or perhaps velcro (with the hook side on the ruffle) might have worked better. 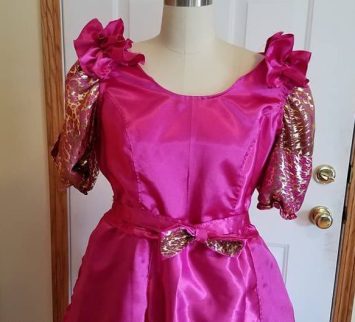 You will note there is a separating zipper in the back of the dress.  As we were trying to make this costume change faster, we had the thought that the dressers could pre-snap the pink bodice and then carefully bring it up around the gold dress and zip it in the back (sort of like the Marie cape, only backwards).  The dressers never got the concept of this, and were able to make the snaps work, so we didn’t use it.  I DO think with more practice it would have been helpful.  It was just one too many change we tried to make last minute.  Below is a view of the back of the bodice with the zipper open.

The gold dress was initially made of gold bridal satin from Fashion Fabrics Club.  As we were struggling, the sewer thought the weight and thickness of the skirt fabric was part of the problem and so she replaced it with a gold stretch lame.  The overskirt is a mesh tulle with ribbon and sequin embroidery, also from Fashion Fabrics Club.  The pictures don’t show it, but it was wonderfully glittery on stage.  Initially the dress was sleeveless, but, we didn’t like that look.  The costumer just added sleeves that attached at the top of the straps, and, since the color was almost a nude, this worked really well.  The dress has lacing details on the front, and sequin ribbon straps. 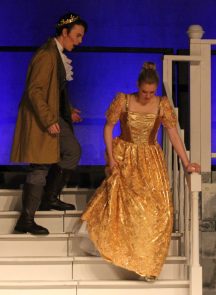 The hem of the skirt was tacked together in a few places and weighted with drapery weights to help it drop. 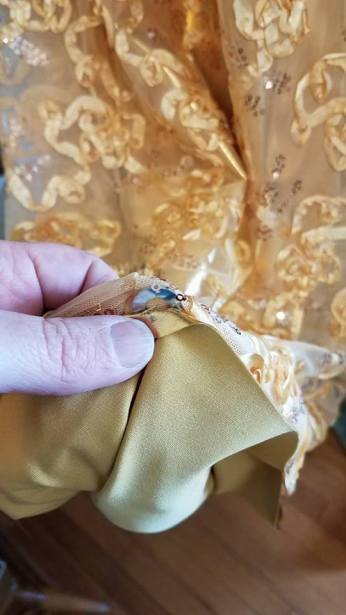 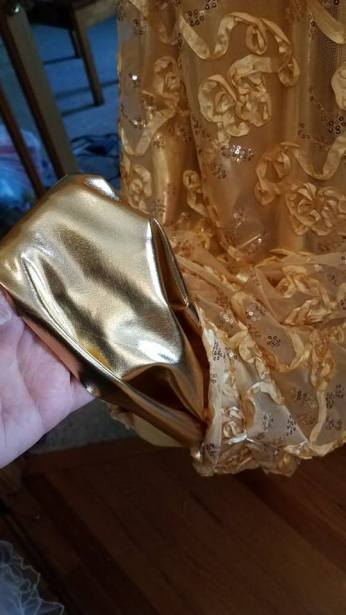 After the transformation and before Ella went to the Banquet, we added a petticoat under her skirt. 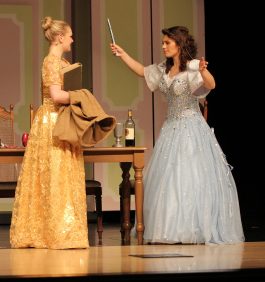 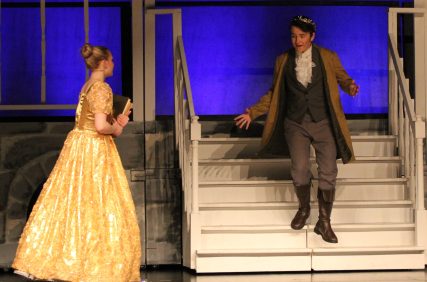 The audience absolutely loved this dress.  I think I heard more compliments on this particular dress than any other in the show.

The additional costume piece that we needed was dubbed the “Petticoat Pouch”.  It was a tube of sheet fabric with an elastic waist on one end, a row of eyelet ruffle in the middle and a drawstring on the other end. 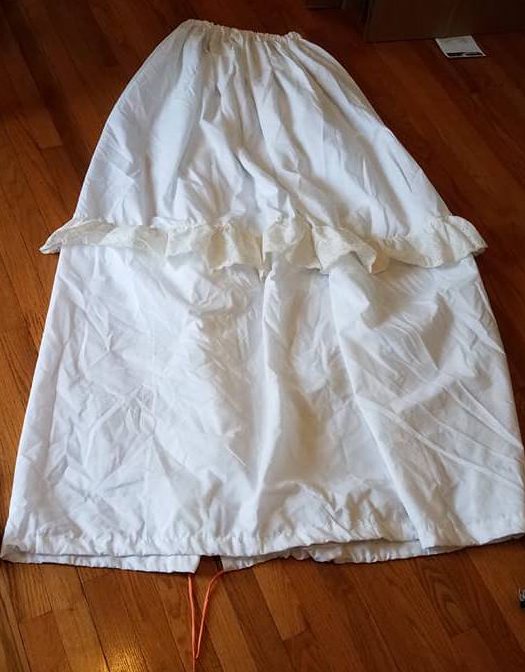 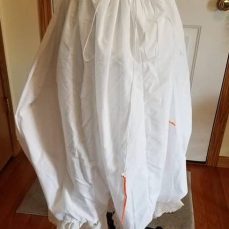 Ella wore this under her One-Piece peasant dress for the beginning of the scene.  She did not use her bum pad or her regular petticoat.  At this point, she has all three dresses on.

To begin, after Ella sings her lines in “Lonliness of Evening” she runs off stage.   After removing her peasant outfit, she steps into the center of the petticoat pouch which has been prepped on the floor.  The elastic waist is brought up.

She then adds the pink skirt:

And the pink transforming top: 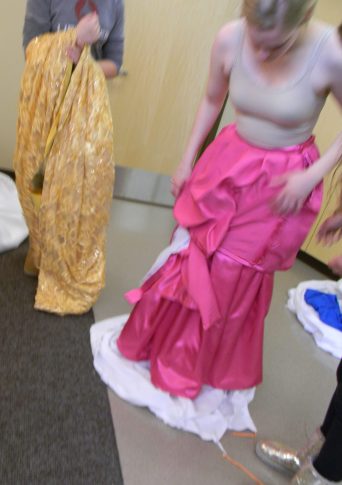 Next she puts on the gold dress: 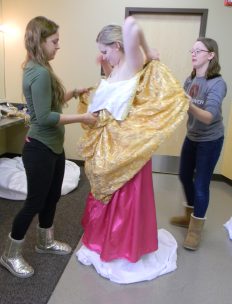 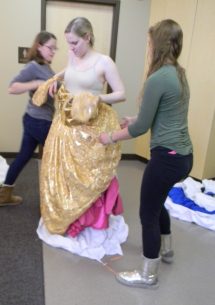 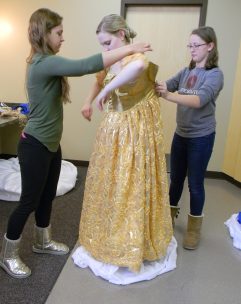 The petticoat pouch is pulled up around both of the skirts, and the drawstring waist is tightened and tied.  The ends of the ties are orange so that they are easily found. 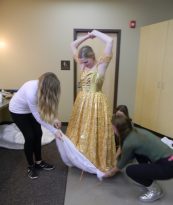 Meanwhile, her other dressers are prepping to dress her back in the one-piece peasant outfit. 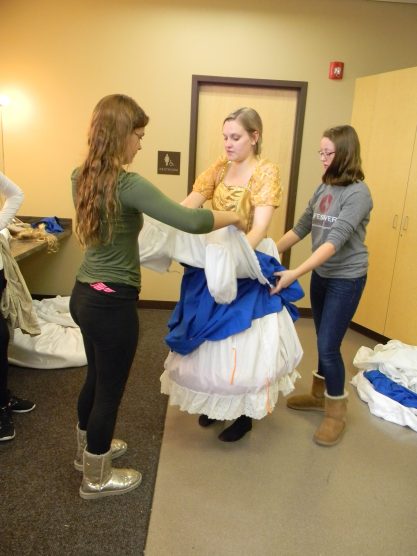 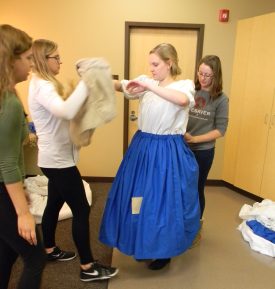 While Ella is on-stage, her dressers run around to the other side of the stage to help Gabrielle change her outfit and prep for Ella to come off stage. 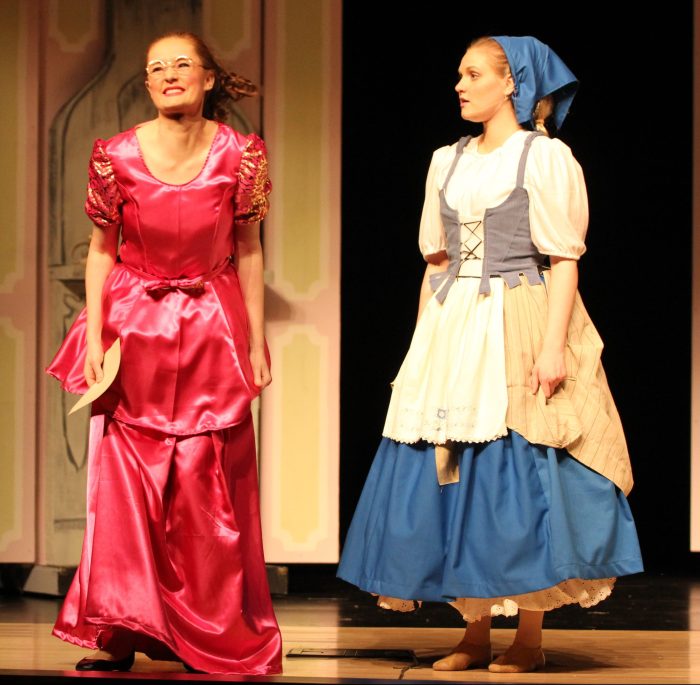 After Gabrielle returns to the stage wearing her simple dress, all ready for her soup kitchen date with Jean-Micheal Ella slips out.  She quickly heads to where her dressers are waiting.  They efficiently remove the one-piece peasant outfit: 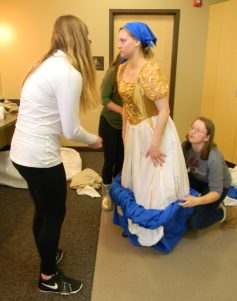 The petticoat pouch is brought down: 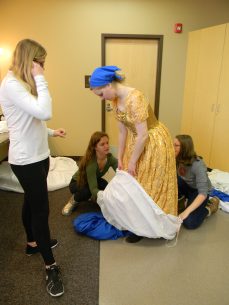 And they carefully pull it out from under the pink skirt.  As it is removed and she steps out, the helper on the floor was helping her change from her peasant shoes to her glass slippers.  She also will remove her scarf at some point.

The gold skirt is grasped about half way down and brought up to hip height and wrapped TIGHTLY around her hips, distributing the excess fabric evenly.

The transforming bodice is brought up in the front and the back and the snapping begins.

And she is ready to head back out onstage: 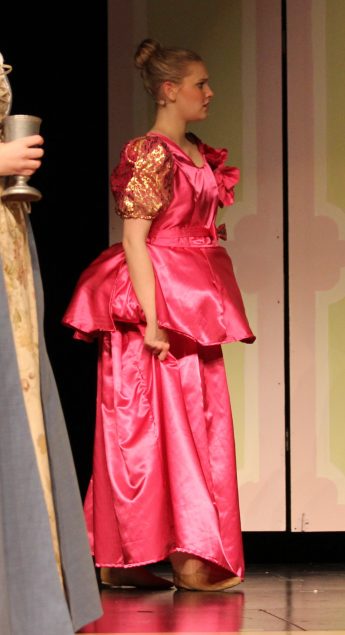 On stage Madame tears off her skirt and ruffles: 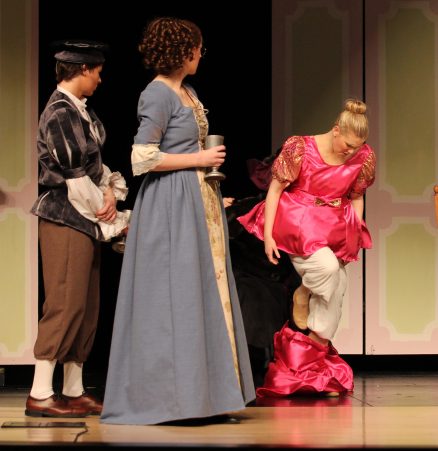 When Ella is ready to transform, she picks up the discarded skirt and throws it up in the air.  The eyes of the audience follow the skirt.  She pulls down on the front of the bodice to unsnap it and the gold dress drops. 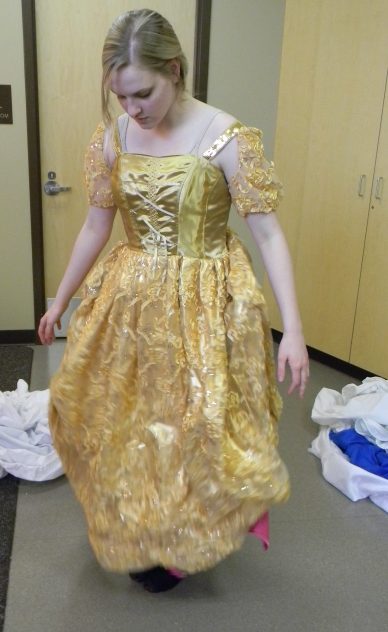 We had her spin, but we would not have had to, the dress dropped well on it’s own.  It could have been interesting to stage Marie flitting in front of her and having her time the dress drop when she was behind Marie.  It is fun to spin, but note that the dresses will fly out and so it is the STOPPING that completes the transformation.

This is our video of the costume changes in Act II.

We hope that this post and our videos help you as you are costuming your production of “Cinderella”.