And here we are . . . the last post for “High School Musical”.  All good things must come to an end.  This show was a lot of fun and a real crowd pleaser.  It did have it’s challenges, and I found it was difficult in it’s own way to costume, mostly because I had less control over the costumes (not too many kids can switch out their corset top or petticoat on a daily basis, lol).

HSM is divided into cliques:  the Jocks, Thespians, Braniacs and Skater Dudes.  We expanded that a bit to Skater Dudes/Goth girls.  I dresses these groups in a very stereotypical manner.  The cast members provided some of their own costume pieces, but my instructions to them were that they should wear their MOST stereotypical outfits for the “Status Quo” lunchroom scene, as I wanted it to be almost cartoon-like in exaggeration.

We only had three tables, so it ended up dividing up into the Braniacs, Wildcats (jocks/cheerleaders) and misfits (Thespians/Skater dudes/Goth girls). 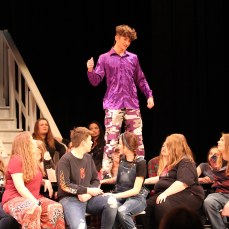 The Brainiacs wore argyle, plaid, bow ties and no jeans.  I put Taylor and Martha in skirts, blouses and sweaters, and many of the other girls also wore that look.

The Thespians were dressed in clothes that were just a little “off” or “out there”, something artsy.  They probably had the least-defined look.

The Skater Dudes/Goth girls wore plaid, dark colors, beanies, grunge and dark lipstick.  We ended up with the purple camo pants and purple satin shirt because the cast member LOVED the pants and claimed them right away, and the purple shirt matched.  Even though it isn’t “skater” per se it worked because it was different.

For the finale, I had all of the cast wearing red & white Wildcat gear.  I found shirts in the clearance section of Epic Sports and each “group” had a themed shirt.  I also sprinkled a few non-grouped kids here and there. 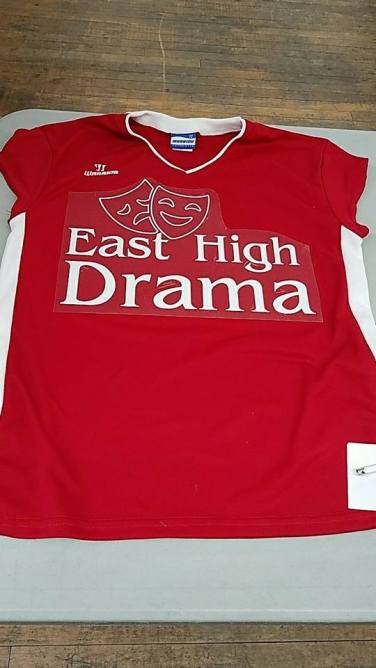 The DO have a science club logo . . really, lol 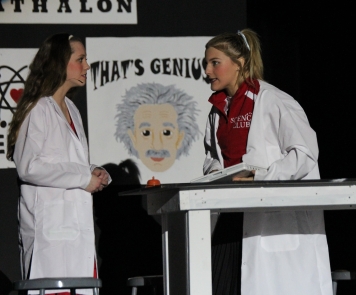 **Lab coats**  This seems like a good time to mention the lab coats.  You will need jackets for every kid/Brainiac in the Chem lab scenes (and this includes Sharpay).  I used an assortment of lab coats and shorter white scrub jackets.  You could also use white shirts–maybe cut the bottom off straight and cut the collar off (just leaving the band).  I was able to find enough at my thrift stores over the course of a number of months.  Size wasn’t really important.  Do note the stacking of costumes–Taylor has her “A Old Crab Mug” shirt on under her science club shirt.  These are some fast costume changes and need planning.  It will probably take the kids more than one shot to understand how and where to prep/pre-stage and stack their costumes.

For the Audition scene I tried to dress the kids in quick costumes that reflected the character of the vignette they were portraying.  We did substitute a funky jacket for shoes.  These were quick, fun costumes we just pulled out of our stock, but they did help ramp up the fun.  I think it also helps set up the Sharpay and Ryan “event”.  Clearly, at this school, auditions are a production . . . theirs was polished and professional, and the other kids are clearly wanna-be’s. 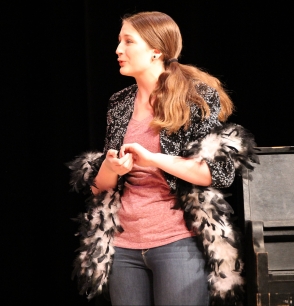 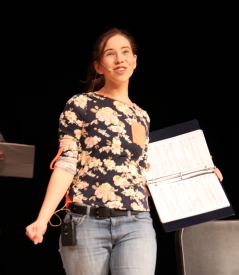 Kelsey is another wall-paper sort of character, in her own quirky Thespian sort of way.  The movie sets up that she wears hats, and so we continued with that theme.

I found this fox shirt, and it immediately said “Kelsi” to me and helped me frame the rest of her look. 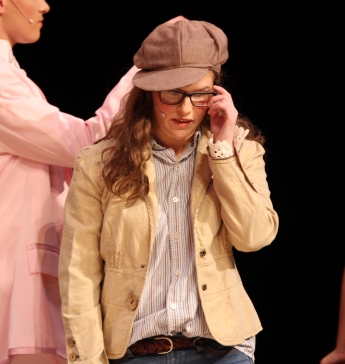 Tuesday she wore a beige jacket with lace trim.  This is the one that looked so lovely in the quartet with Troy, Gabriella and Ms. Darbus.  On Wednesday she wears a Mickey Mouse face shirt . . . reflecting back to the fox face.  On Thursday she wears another vest/jacket look.  We layered the crochet vest over the dark brown one to give her that visually interesting boho look at the piano.  Friday she wore a red and white top that didn’t scream “Wildcat”, but fit in nicely later on in the scene.

We used a female Jackie Scott.  I consulted with both her and the Director about how she wanted to play her character.  She decided to go with the nerd look.  Since she IS the voice of East High, we dressed her in red and white, and she mixed and matched her clothing pieces to fill in the days of the week. 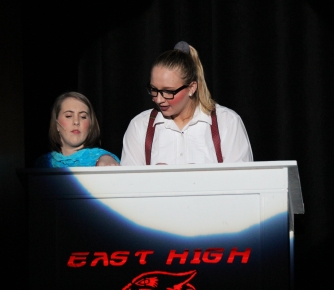 Coach Bolton had a two polo shirts with “Coach” and East High logos on them.  For the Big Game he wore dress pants, a white button down and a red tie.  He had a red whistle, and he added the red pencil.  I had purchased him a red hat and red athletic pants, but he chose not to use them (which was fine, they were options).

Our band wore upgrades of our old marching band uniforms.  We covered (I say “we”, but it was a parent volunteer) our old black and gold hats with some red glitter fabric-stuff (clearance Christmas tree skirts).  The red shakos were from a dance team production last year. 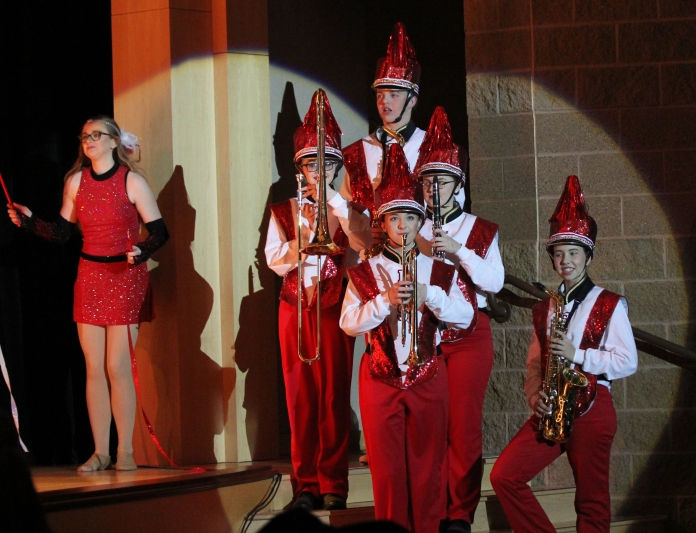 We made red knit pull on pants (fabric from On The Go Linens).  The black sections of the overlays were covered with red sequin mesh (also from On the Go Linens) . . and note how lovely and sparkly it is, as opposed to the white stuff on the cheer uniforms.  I had red glitter HTV done in a vertical “EHS” and heat pressed it on to white knit, and appliqued that on to the front of the overlays.  However, since they were always holding their instruments,  it never really showed.

And  . . . . we did have a bunch of lovely Wildcat themed school bags.  The larger logos were the best, and some of them I put too close to the bottom.  Live and learn . . . although I expect I will never be heat-pressing drawstring bags again.

And, that finishes up what I did for “High School Musical”.    I hope this helps insire you with some ideas for your show!

If you enjoyed the post, please consider liking, commenting and/or following my blog.  Thanks!