In the musical “Grease” Johnny Casino is a 1950’s rock-star who comes to town to sing at the big Dance Contest.

I decided early on not to go with pink–that just isn’t a color that is easily found in guy styled clothes . .but . . I did want to incorporate some of the components–ruffled shirt, tux style jacket, and a “style”.

My first major find was a grayish-silver shiny jacket at a Thrift store (I neglected to take a picture before I added the sequins). 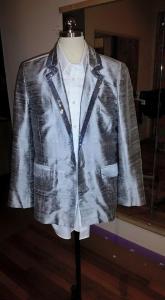 I then found a white & silver dance dress I had purchased from a local consignment store in the Halloween clearance, and purchased a white shirt and black pants at a local church thrift store. 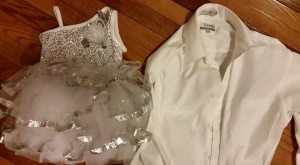 The silver sequin ribbon I had left over from another project.  This ribbon is readily available in chain craft stores.  It is super easy to sew on, looks good on-stage, and washes well. 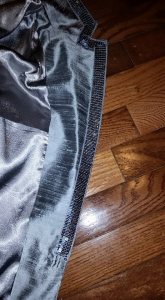 The first thing I did was sew the sequin ribbon on to the jacket.  I later wished I had folded the lapels to create a shawl collar look, but, once I had the sequins on I decided to leave it.

Next came the shirt.  I wanted to make a ruffle tux shirt.  The skirt of the tutu is made with glitter tulle.  As I have mentioned before, I try to avoid using glitter fabrics because of the shedding factor (the custodians HATE it, and some auditoriums have glitter-free clauses in their rental contracts).  This particular dress had been well-loved, plus I had washed it, so the “shedding” factor was almost non-existent at this point.

First, I cut off one of the layers of the skirt.  I then sewed the tulle on to the front of the shirt.  I didn’t bother to run gathering threads, I just smooshed it under the needle as I went along.

I marked the center front of the shirt where the button placket went to help me make the lines for sewing the ruffle.  The first time I sewed the ruffles I made the outside row narrow, but I left the inside quite wide–maybe 2-3″, (see picture with jacket).  This did NOT work.  There is a reason ruffles on tux shirts are fairly small.  The opening between the jacket lapels really isn’t that large .  .so big ruffles just disappeared.  So, I just squished the ruffles down and re-sewed them to make them shorter.  Another time I would cut the trim narrower to begin with. Since the ruffles were made of tulle, I did not need to do anything to the cut edge.  I did heat seal the ends of the silver ribbon (I use a woodburning tool). 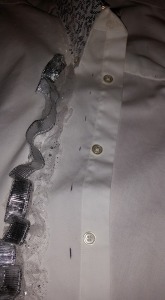 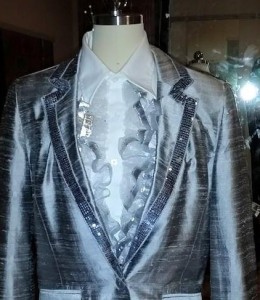 Next, I used the white and silver sequin fabric from the top of the dress to cover the front button placket and the collar. 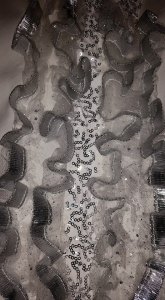 One mistake I did make was to extend the sequins all the way down to the neck portion of the collar.  This was very itchy for the cast member wearing the costume.  I later went back and added a piece of ribbon to protect his neck from the sequins.  Another time, I would mark where the collar fold over, and just applique the sequins up to that point. 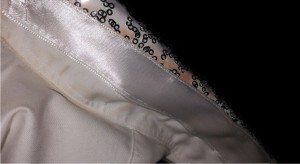 Next, I added a row of ruffles to the cuff.  Again, I just squished the tulle together as I sewed to gather it, and then heat sealed the silver ribbon. 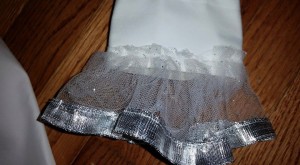 The last thing I did was to hem the pants, and sew sequin ribbon down the sides.  I did have to sew first down from the top, and then up from the bottom of the leg to get it done without opening up the pant seams. 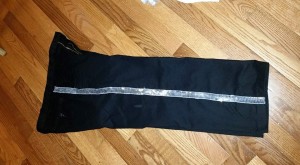 I added a tie out of some silver mesh that I had (made a tube, sewed it shut, wrapped a center piece around it, glued it around the “tie” and a piece of elastic with small pieces of velcro on the ends for closing) 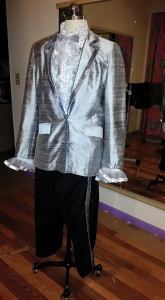 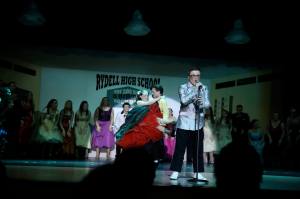 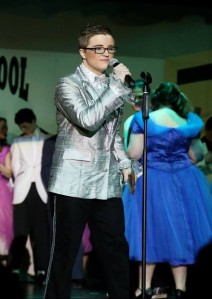