Our musical this spring is “Legally Blonde”.   On the one hand, this was a welcome change from the period shows we have done the last two years (“Beauty and the Beast” and “Grease”).  On the other hand . . there weren’t nearly as many fun costumes to make 🙂

The beginning starts with research:  reading the script, obtaining a costume plot, looking at images, and watching video. 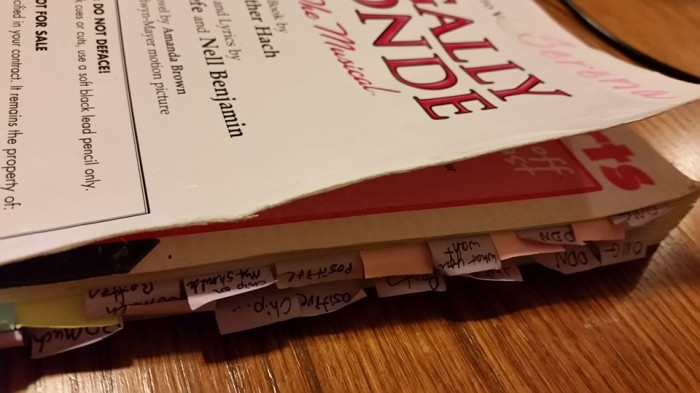 I decided I wanted to do more with color coordination in this show.  This whole costuming adventure is a work in progress and I am definitely learning more and more all the time.  I also wanted to try and do more character development through costume choices.

My daughter and I attended a touring production of “Newsies” this year.  The lead character always had a blue shirt on, and he wore that outfit throughout the show.  Now, you would think that the main character should have lots of costume changes because HE is the most important . .but what I realized, is that by NOT changing costumes, and by always having the same color shirt on (and he was the only one in that color blue), those of us in the almost-nosebleed section were able to identify who he was.  Did it bother me that he wore the same clothes every day/week/month during the time that was supposed to be transpiring in the show?  Not a bit.

I also saw a video of the wedding scene in “Mamma Mia”.  All of the wedding guests were dressed in shades of orange.  Some were darker, some were lighter, and they were mixed with neutrals, but common denominator among the costumes was that orange color.  It was highly effective and created a very striking visual effect.

In “Legally Blonde” pink is Elle’s signature color.  I learned a lot about pinks  . . as in . . all pinks are not the same, some are more orange, some more red, some more purple . .aka, they are a lot harder to match than you’d think!

I wanted to try to have a PLAN for the show, dividing groups by style and colors, and also developing characters through the use of costumes.  Many of the characters in this show are growing and learning and changing  . . . and their costumes can help that process along.  I had three basic groups:  The Delta Nu’s, Harvard-types and the Hair Affair.

So, what did I do with color& style:

Delta Nu’s:  I dressed the DN’s in shades of coral & teal.  They are all wearing dresses or longer tops with leggings.  The outfits are all summery.  For the final trial, the three main DN’s are wearing pink in support of Elle.

Greek Chorus:  I dressed the Greek Chorus in bright white and metallic silver.  That means lots of silver sequins 🙂  The clothing styles are more mixed . . but the colors are consistent.

Harvard:  Maroon was my Harvard color.  My “generic” Harvard students are all dressed in neutrals and any additional color is in shades of maroon with just a touch of blue.  Once a cast member asked me what date/era I was shooting for . . and I replied,  “No date, just stereotypical law student”.  I also utilized various maroon shirts with a gold felt “H” sewed on.

Elle:  I dressed Elle in shades (obviously) of pink.  The more pink the better.  And sparkles, especially on her first day at Harvard.  As she attempts to integrate into Harvard first she loses the sparkles, and then she dresses in neutrals, but the styles are a bit flirty.  By the time she reaches the trial, she is dressed fairly conservatively.  She then converts back to a bright pink dress with a touch of a ruffle for the closer.

Warner:  Warner begins in California with a brightly colored shirt.  His clothes tone down during the show, but then brighten up for the closer.  He never really quite “fits”.

Enid:  Enid begins in a camo/peace corp look.  She sticks out at the party in a sort of hippie-esque outfit.  She is casually in  neutrals by the end of the first act, and then moves into her “law student” clothes for the trial.

Padamadon:  Padamadon begins wearing a tunic/robe.  For the party, he has on regular neutral pants and a shirt, but wears a vest with an elephant.  He progresses to “stereotypical” clothes by the second classroom scene.

Harvard Party:  the students are primarily in black . . . this is more of a cocktail party (again, stereotypes).  Enid sticks out in her browns, Padamadon has his elephant vest, and Elle, of course, has her hot pink bunny suit.

Whipped Into Shape:  In the beginning “Excercise Video” I opted to have everyone dressed the same.  I chose a bright green top with black sparkle shorts.  Brooke is wearing bright orange pants with a pink top.  When we switch to the jail, Brooke adds an orange jacket.  The jail girls are dressed in orange pants and a black and white striped top with a glitter “JAIL”.

Brooke:  I chose to make Brooke a bit of a sexy ditz.  She wears two polka dot dresses . . the first in neutrals with lipstick red accessories.  She then switches to a tight black & green dress & platform heels.

Parents:  Elle’s parents are a bit eccentric.  Why not?  Her Dad likes plaid, and her Mom is partial to large hats.

Paulette & the Hair Affair:  The entire Hair Affair Crew is dressed in bright colors and large patterns.  This is done deliberately to contrast to the staid Harvard characters.  Paulette is eccentric and edgy.  Her costumes are supposed to help you say “This is a FUN person”.  My Paulette liked to dress in layers, and three of her outfits had fringed vests.  She also had a hair accessory for each outfit.  Each outfit was different, but, she had recurring themes.

Vivienne:  Vivienne is classic elegance.  She is always conservatively put together.  She is perhaps a bit overdressed, but, in a tasteful way.

Each of the cast members is measured during auditions.  These measurements are put in an Excel spreadsheet.  This makes it easy to divide them by group, and also send the information to other volunteers.  I can sort them by a size measurement, like waist size or skirt length, depending upon what costume I am assigning.  I can also make copies of individual measurement/contact sheets when I hand a project off to a volunteer.

I work out of a binder.  Each cast member has a page that lists who they are and what costumes they need.  As I work through the cast, I make notes on what their costume looks like, and what they wear for each scene, and what I am missing–like a belt or blouse.  This was especially important for this show as I had a 60 member cast with lots of changes–by the end of February, I couldn’t remember what we had decided on for costumes in early January!  If we are creating costumes, this binder will also have my information on the period, photos of ideas, and sketches of what I would like their final costume to look like.

I also have an email address and make a group email list for all of the cast members.  They laugh because I tend to send them lots of emails . . . but as I come up with a question or I need a fitting, I just shoot them an email.

As I assign costumes to a cast member, I have large manilla tags with wire loops to label them.  I also like to use shower curtain hooks (circles) to clump hangers together.  I later use the shower curtain hooks to separate costumes on the hanging rack.  If the show demands, I write out a card with a description of each costume and when the cast member is supposed to wear it.  Even though we talk about it during fittings, often they have questions, and by writing it out, it saves me TONS of time later on.

I also keep running lists of costume “needs” as they come up, so I can try and remember them all!

Sometimes I organize my cast members in large grids, then I can make notes on what pieces are needed and what sizes I need, and carry that with me as I am shopping.  Skirt?  Blouse?  Petticoat?  Corset?  I love to see those boxes start filling with check marks!

I communicate with my volunteers in various ways.  I do some direct emails.  I also write up Google docs with lists of jobs that need to be done.  My volunteers can then look through the lists to see what appeals to them, and volunteer for those jobs.  I keep notes on who volunteers, and also when it is completed.

And then there are the sticky notes . . . everywhere.  (If you can’t tell, I am not very good at last minute and/or “winging it”).

No doubt there are better methods, but this works for me!

The posts that will follow up and describe what was done for “Legally Blonde” will be more descriptions of what I chose, with just a smattering of altering & upcycling included, since this production required less of that sort of thing.