Corsets are perhaps one of the most identifiable “period” garments.  They come in various shapes & forms and go by various names.  They can go up over the shoulders, or simply go around the waist.  They may extend down over the hips.  They may stop under the bust, push the bust up, or squish the bust down.  Certain era “looks” may require a particular version, but, for the most part, for your run-of-the-mill audience and your basic community/high school production, one is probably as good as another.   Attention to detail and historical accuracy depend greatly upon resources of time, skill & money.

When deciding upon how “real” to make your costumes, in addition to the above listed considerations, I have also found the age (and enthusiasm) of the cast members, and the speed of any costume changes to be constraining factors.

As a rule, many high school age students have difficulties with ties and stringing through eyelets.  They also have difficulty tying behind their backs.  In a way it makes sense as this is a generation that mostly lives in stretch knits and non-lacing shoes.  In many cases, giving a kid a vest with lacing ties in the front means repeated explanations and demonstrations.  Not always, but enough that if you are dealing with a large cast, you may want to consider an alternative design.

There are various ways to “fake” the lacing look.  Garments can have non-adjustable lacing that is sewn in place and is strictly decorative.  Another option is to have functioning lacing that is adjusted to size, and then tied off for the duration of the show, while the garment is actually put on and off with an alternative method, like a zipper or hook and loop tape.

The following examples are by far not an all-inclusive list on how to create the “look”, but, hopefully, it will give some ideas.

One way to fake a vest-type corset is to start with a fitted blazer.  I try to pick one that is fairly short and fitted.  If it has a peplum bottom that is even better.  These two vests were made from blazers: 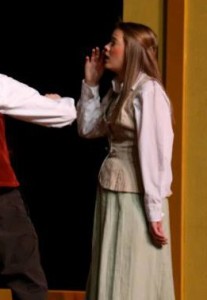 This style of corset vest is fairly easy to upcycle from a blazer . . however, it is harder than you would think to find the correct style, in a correct fabric type and style.  I will try to post a more detailed explanation of how to do this in the future.  However, basically, first you sew around the armscye with either a close zig-zag or a stabilizing stitch.  Then you cut the sleeve out.  You can either just leave it bound by the stitching, or, add some sort of binding (like bias tape).  Then, you may need to recut the neck line/cut the collar off (finishing those edges in some manner).  I sew the pockets shut and cut off any flaps.  Then, I decide on some type of front closure–lacing, fake lacing, hook & loop tape etc.  It all depends upon the shape of the original garment and the size of the cast member. 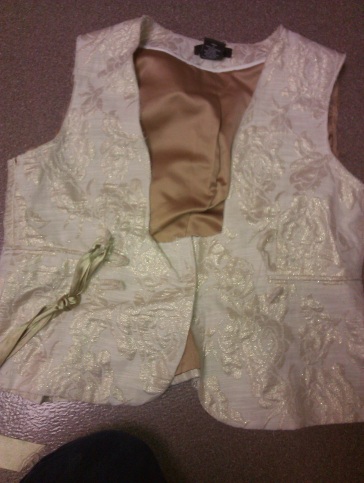 This one has corset loops made with left over fabric from the collar. If you are lucky, you may be able to cut out a flatfeld seam to use to make the loops.

This is a fake waist corset.  The waist corset could be made from a single piece of fabric.  This one is constructed in two pieces that are joined by the ribbon “lacing”.  It fastens in the back with hook and loop tape. 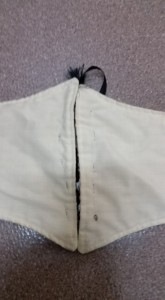 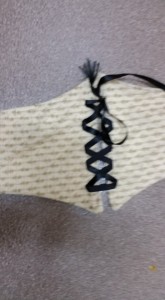 The “corset” on the right is shown above. The one on the left was sewn from a thrift store skirt.

The purple & red waist corsets were made in the same manner.  Below you can see the hook and loop closure in the back.  This sort of garment will need some sort of interfacing to help prevent it from folding when wearing.

This is a one piece corset and overskirt.  It has lacing under the bust. 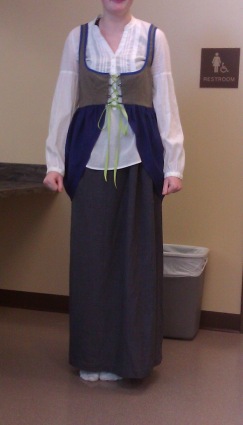 This is an example of matching corset vests.  These were sewn from a pattern and were honestly awful.  They seemed to be poorly designed, and the shoulders would not stay up.  We ended up tying them together in the back with clear elastic.  Two of these are fastened with lacing in the front, and the third has false lacing and is closed with a zipper in the back. The pink outfit has the zipper.  It is actually a once piece dress as this cast member was also in the prologue so had a quick costume change.  The green & orange vest outfits are separate peasant shirts, vests, skirts and petticoats.  There are pro’s and con’s to both methods . . the one piece dress tended to look better, BUT, it is a very one dimensional costume, whereas the other two costume components can be used separately.

Thrift store vests can also yield possible corset substitutes.  Look for fitted vests, with “V” or deeply rounded necklines and appropriate fabrics.  Again, as with blazers, these are harder to find than you might think, but, occasionally be found.

There are lots of possible ways to achieve a “corset” look . .these are just a few examples.