In our production of “Cinderella”, Ella had two capes.  The first was the one that she wore to the Ball, and the second was a “transformation” cape.  She wore this for the Pursuit, and then as she  stood up after the chase, the cape was sucked into the stone wall and disappeared and she was revealed in her peasant garb.  We used two capes because  . . . well, I suppose that I wanted to.  We probably could have made do with one, or none, if you did something else for the Pursuit.  I had ordered fabric for Ella’s cape early on, otherwise, we probably could have made her a white one that would have matched Madame, Charlotte and Gabrielle, and that would have been fun too.

This cape was supposed to be super easy.  I started with a detachable tulle wedding dress train that was decorated with ribbon and rosettes.

It had like 5 layers of tulle.  They were sewn together on a band at the top.  It tapered out, pretty much just like it looks in the picture.

I put it on my long-suffering daughter and figured out where the arms would be.  Along one of the seams I pinned in arm openings.  Then I zig-zagged around the seam, cut it open, and I had a cape. 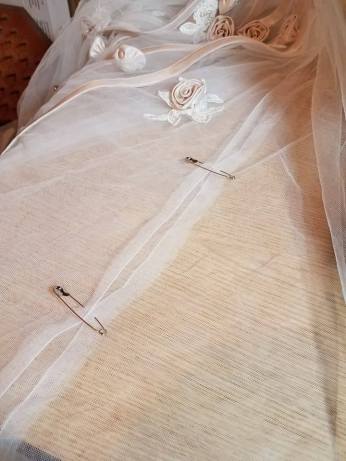 I ran some rows of white iridescent string sequins on the front.

Then, because I couldn’t leave well-enough alone, I decided to sew on some lace I had with iridescent sparkles.  You can see it around the top edge in the above picture.  Well, first of all, that cape was WAY bigger than I thought it was so it took me FOREVER (it seemed like) to sew that lace on.  But,  I had enough, and it was pretty.  Then I went to swish it around and admire myself in the mirror.  That stupid lace clung to the tulle like the hook side of velcro.  My lovely flowing cape was a wad of mushed tulle.  I was not a very happy camper as I considered my options.  The most obvious one was to pick out the stitching and remove the lace.  However, I happened to have a roll of 6″ white tulle sitting by my sewing machine, and I came up with the idea of enclosing the lace inside a fold of tulle.  That way it couldn’t stick to anything.  That worked pretty well.  Unfortunately, it was such a mess that I couldn’t manage to fold and stitch the tulle at the same time, so I had to stitch it twice:  once to sew it on, and once to fold it over and stitch it down.  (If you’ve read my post about the pink pettticoat for Charlotte you know I didn’t learn my lesson with that lace).  Moral of the story:  don’t be tempted by pretty things. 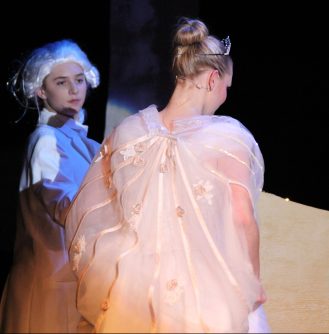 Overall, for the $2.88 I paid for the train, it was a pretty easy and effective costume piece.    The lace was not expensive, and I used it on three different costumes.   I also liked this cape because it was light and airy and didn’t overwhelm her Ball gown.  The cape (along with the shoes and the tiara) were preset in the carriage.

After the Ball, Cinderella runs away from the Prince and a prolonged chase occurs.   We first see her accompanied by the Coachman and Footman and carrying her pumpkin and mice.

The idea is that it is supposed to look like she still has her Ball gown on and the magic hasn’t quite worn off yet.  We weren’t totally successful in that.  The cast member liked to clutch the cape and pull it up, and she was afraid of tripping on it.  But, for our high school production, it was good enough, especially since we ran out of time!

At the conclusion of the Pursuit, Ella hides behind the wall. 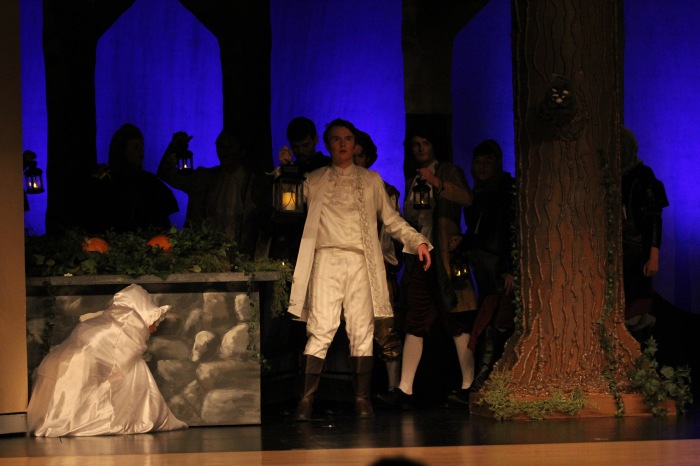 When she stands up, the cape is sucked into the wall, and she is revealed in her peasant garb once again.

You can see it at the :38 second mark in this video.

To make this costume I purchased a 10 yard bolt of white satin from Tulle Shop.  It runs about $1/yard plus shipping and they will run sales.  They will often be out of colors, so, don’t wait until the last minute to order.  I have ordered satin from them several times, and have been happy with the fabric.  This particular bolt of fabric was not the best.  It pulled easily, and just was a bit flimsier than what I had purchased before.  However, I wanted super lightweight fabric that would easily squish to pull through a small hole in the wall, so it worked.

This cape was the combination effort of three people–another one of those costumes that needed tweaking along the way.  We began by making a basic hooded cape.  You get the idea of the basic shape if you ignore the dangling front flap.

Originally, it had a sort of wrap skirt in it that Ella was supposed to untie.  She had trouble putting it on, and trouble getting it off, so it was back to the drawing board.  We ended up adding another front panel.  This was sewn on one side, leaving an armhole.

The other side closed with a tie.  We made the strings colored so they would easily be visible.  Her left arm came out this slit in the cape.

The front panel had a piece of non-slippery fabric on the top.  This tucked down into her bodice, and helped support the weight of the front of the cape and hold it together.

The neck closed with a little bit of velcro.

The original hood was a little small, so I stuck a ruffle on the outside of it.  I also added a row of velvet ribbon to keep it from slipping back.

She does need a hood  because her hair and scarf need to be covered.

When she crouches down in front of the wall, she opens the velcro (while her mic is still off), pulls the flap out of her neckline and unties the side ties.  Then when she stands it is completely loose and can be pulled off.

We maybe could have had a better skirt look by making an “apron” in the front that attached into the side seams of the cape.  It could have tied around the waist, and had a similar front flap that tucked the same way ours did.  This may have helped with the length issue and made if feel more secure as she was running around onstage.  What we had worked fine, but I would have liked to have had a little more time to re-tweak it.