One of the most memorable songs (at least for myself and my sisters) from the 1960’s movie “Chitty Chitty Bang Bang” was the “Toot Sweet” song. This is a grand, frolicking piece with a very singable chorus, and of course, the added joy of the dogs storming the Candy Shop at the end is very appealing. The original movie scene is done in shades of gray with little pops of color from the candies.

The musical version of “Chitty” repeats that iconic scene, and of course, requires a costume set. One of the most popular posted pictures of the costumes features dresses made of wide candy-striped fabric. Who wouldn’t like colorful costumes like these?

I do not own this photograph

When my sister was first planning these costumes (after her initial costume talk with the Director), she thought she would need six Candy Shop costumes, and the above picture was their proposed vision. Sewing dresses for that many cast members would be a do-able thing. So, the quest for striped fabric began. She and I both spent a considerable amount of time looking for striped fabric, at an affordable price, in desirable colors. We could find chevrons, dots, red stripes, micro stripes . . . but not what we were looking for. (For those of you reading this post . . . 2″ striped satin fabric can be found in 17 colors from Urquid linens–I didn’t find this source until too late in the game for her project).

In the meantime, since fabric wasn’t happening, we started looking for dresses that might possibly work in terms of style, color, sizes available and price. Rosegal and Dresslily are two online shops that show the genre of inexpensive vintage-looking dresses that we were hoping for. Ideally, a stripe would have been good, possibly a polka dot. We also looked at online costume shops for Alice costumes, maid costumes, sissy costumes . . . or anything that might look like it would do. The original goal was $20 or less per costumes, although with only needing six the price could possibly go a bit higher, especially if they could be used as is without any upgrading–time is money, after all. (Look up “pastel maid” for some cute, albiet pricey, outfits).

Then the cast list came out, and the Candy Shop scene needed 22 women’s costumes . . . and coordinating male costumes. Don’t you love it when conversations are running parallel and what one person heard is not what the other person meant? But, better to find it out earlier versus later! It did mean going back and rethinking the whole project, but no decisions had been made, so nothing lost.

After some more internet searching, we found these dresses at less than $15/each.

The plan was that these could be adapted into aprons. My sister was able to order them in a variety of sizes, and then ordered a couple extra for fabric so that she would be able to lengthen straps or add more skirt to the back if needed. The Director had wanted practice dance skirts, and so we had already planned to make assorted petticoats, so we thought those could go underneath, at minimal cost. We decided that long-sleeved white t-shirts would be the least expensive shirt option, and they could make a ruffled collar to go around the neck and give it a period feel.

When the dresses arrived, she and her volunteers removed the back zipper and opened the back seam. They dresses were trimmed with eyelet and different bright colors of ric-rac. 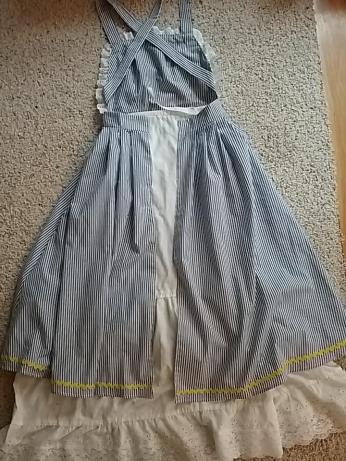 At this point I would like to take a little time to say a few words about all the costume people in this world who don’t make the flashy costumes. I have had the privilege of cherry-picking many of the fun-to-make costumes out of this production . . meaning the creative, one-and-done, stand-alone costumes that suit my preferred slash-and-patch version of upcycled costuming. The thing is . . . the flashy costumes won’t look nearly as good if they aren’t supported by a strong foundation of basic costumes, and those take hours of coordination, hundreds of tiny decisions and choices, and a commitment of time to making costume pieces that no one may ever even see–like bum pads and bloomers, or ones that you have to make over-and-over again. If the audience is distracted by mismatched socks, hoop lines and dragging hems, nothing looks good. So if you are one of the people who sews on buttons, does laundry, pins hems, rips out zippers and seams, or helps in any way–give yourself the recognition you deserve–it’s not all about the sequins.

Costume sets are one of the things that make a costumer groan, because they tend to be expensive and can eat up your budget and your time/sewing resources. Costume sets are also notoriously boring to make. Making one is fun, two or three aren’t bad . . . twenty is just plain boring work.

The decision to go with a commercially available costume base had to do with a combination of time, resources and money. Realistically, the head costumer has to look critically at the overall costume needs, the available time frame, and, of course, the budget. I like to look at things in terms of a 40 hour work week. If it takes me 1 hour to costume each kid, and I have 80 kids in a show–that is two weeks of full-time work (and how many cast members can you realistically costume in an hour?). So, if you choose costumes that take 6 hours to make from start-to-finish, x 20 kids is 120 hours, or 3 full-time work weeks. Every time you add a step–a bit of trim, a ruffle, a fitting . . . multiply that by the number of costumes you need, not just in time, but also $$. A $2 change is close to $50 on this costume set. A group work day with assembly line construction can be a good way to make costume sets, but that also takes pre-planning, coordination and a space.

Another thing I like to think about when planning costume sets is future use. Is there any way to make the costumes so that they can be used again? If you are going to invest in a costume set, it would be nice if they weren’t necessarily show specific. By adding removable colored elements, like ric-rac and colored sashes, the aprons could be used in the future in other ways. For example, they would make great aprons for maids or novitiates. They could also be used over pioneer dresses, or 50’s house dresses, or with a red cross for a period nurse costume, and if shortened they could be Hot Box Dancer costumes.

The ruffled eyelet collar ended up looking something like this:

The base of the band is 1″ twill tape. The top eyelet is 1″ the bottom is 2″. It ended up not being long enough to cover the neckline, and if the neckband was worn looser the eyelet flopped. They ended up having to supplement the 2″ eyelet with strips of white sheet fabric to extend it down to cover the neckline.

This was an intermediate suggestion, but you can see it doesn’t have the same period feel. 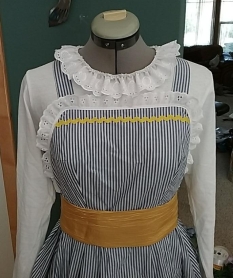 As she was working on the costumes, my sister was unhappy with the varied look of the different petticoats under the aprons. She felt it looked like the costumes were incomplete and the girls were wearing their underwear. She opted to purchase large white round tablecloths to make circle skirts. This added about $8/costume, which doesn’t seem like much for a long skirt, but when you multiply that by 22 . . .then you start having second-doubts. However, a set of plain white skirts could be usable for tons of different uses–many the same as the aprons, plus anything with snow, a wedding, ghosts, fairies, ladies-in-waiting etc, and circle skirts can also be folded in half and used as capes. These could also double as petticoats or practice dance skirts. So, in a case like this, you look at the costumes as an investment for future shows.

So, these are their finished costumes:

They have wonderfully twirly skirts and should look great onstage. 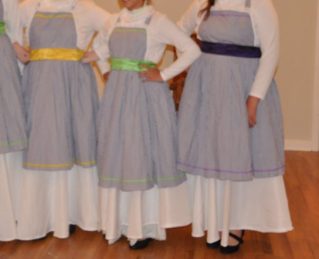 You can see the difference adding bodies and petticoats make to the fullness in the skirts. The skirts ended up a little uneven, which goes back to careful measuring not only of the cast member but also the garment, and as my mom pointed out, making sure that the girls are all wearing the skirts in the same place–are they sitting on the true waist, or are some wearing them on their hips? This is fixable by adding some length in the form of a “topper” on the skirts, but it is always irritating since you thought you were done, and now need to mess around some more.

In the end, with the dress ($15), tablecloth ($8), shirt ($4) and trim (ric-rac $3/roll, plus eyelet) these costumes ended up being in the $30 range, which was more than the target price, but hopefully the components will be usable for other shows in the future.

Can’t wait to see those full skirts twirl in the choreography!