‘Legally Blonde’ has two BPN’s  (Big Production Numbers) as I like to all them, the “Whipped Into Shape” two-part number with Brooke Wyndham  and “What You Want” Part 2.  In the latter, Elle (and entourage) burst into Harvard as she presents her LIVE!  IN PERSON!  PERSONAL ESSAY!  complete with marching band, cheerleaders and a whole slew of supporters.

Our Director opted to put almost the entire cast in this scene.  The only ones who didn’t participate were the named Harvard characters and a few select other “Harvard” students, who certainly would not have found amusement with Elles’ admission antics.

The first  big decision in costuming this scene was to decide what the school colors would be.   UCLA uses ceil blue and yellow, with script lettering.  However,  I had access to royal blue and white marching band uniforms, so that sort of (LARGELY!) directed my decision to use royal blue, white and metallic gold.  I also had some pieces that would work to make Elle her Majorette Outfit, which was like icing on the cake.  I opted to go with “U” as the West coast University emblem and “H” for Harvard. 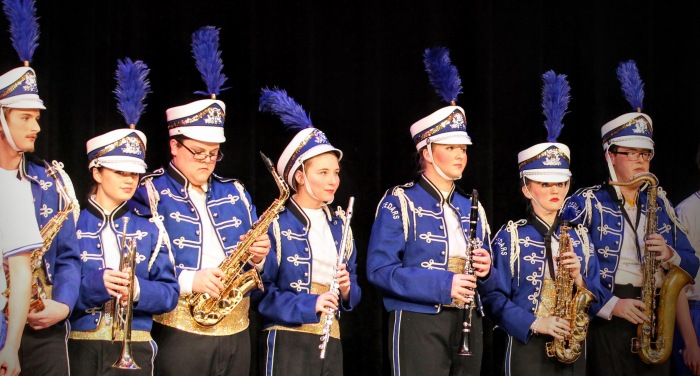 As mentioned, I was fortunate enough to be able to borrow band uniforms from a neighboring school district that no longer has a marching band.  They were blue and white with silver trim.  I added some stretch sequins to the hats (easily removable) and a gold sequin cummberbund (made from my favorite stretch sequins).   The instruments are a combo of ones the kids actually play in band, and some old ones that the band department let them borrow.

If you don’t have real band uniforms to borrow, a “look alike” could be made fairly easily.  The horizontal embroidery on these uniforms gives an ornate military look.  This could be emulated with fabric paint,  felt, or sewed-on braid using either a t-shirt or crew neck sweatshirt as the base.  Our school marching band uniform has an “overlay” which is basically a sleeveless tunic that fits over a tux-style jacket.  This would be a relatively easy option, and could be embellished with just about any emblem/logo plus colors/sequin trim etc.  I think felt would be a good choice of material as it has some body, and would require minimal, if any, sewing.  The stripes on the sides of the pants are a nice touch.  Band hats could be fashioned from cardboard. or skipped altogether.  There are often old band uniforms available on Ebay . . . just keep watching and you may find some perfect ones at a great price.  Hats are a piece that a local band might let you borrow.  I would be  hesitant to borrow “real” uniforms d/t the risk of makeup stains. 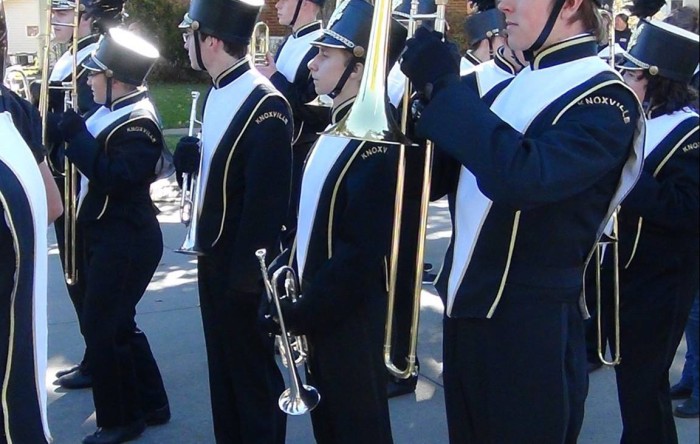 We had a squad of 10 cheerleaders:  5 male and 5 female.  They carried blue and gold flags.  The boys were dressed in blue and white. 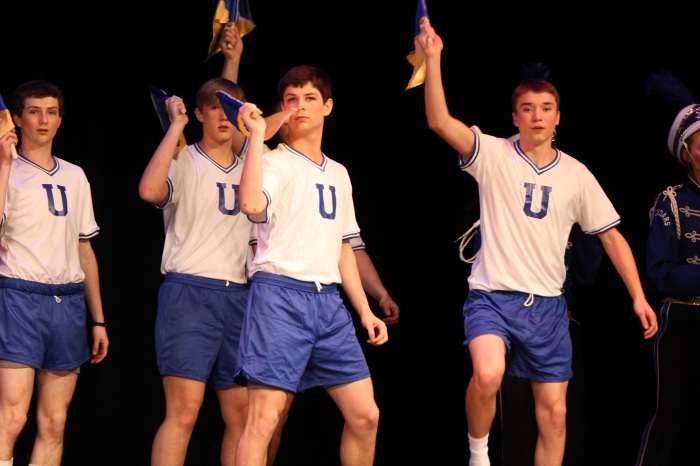 The girls were dressed in blue and white with glitter gold and glitter blue in the logo: 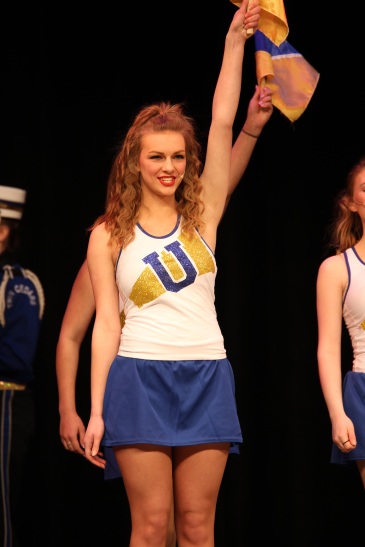 These outfits were all purchased from Epic Sports clearance section.

The emblems were added with heat press materials.

The flags were sewn by a volunteer.  The satin came from http://www.tulleshop.com.  I have ordered satin by the bolt from them on several occasions, and for costuming, it has proven quite satisfactory at usually less than $1/yard.

We did use as many “real” cheerleaders as we could for this group.

The Dance Team is also wearing tops and shorts that were purchased from Epic Sports clearance.  The “U” is metallic hologram heat press material cut into “sequin” shapes.  The skirts were sewn from satin from the Tulle Shop, with 5 row stretch sequin belts.  They carried gold metallic pom poms (borrowed from our school dance team). 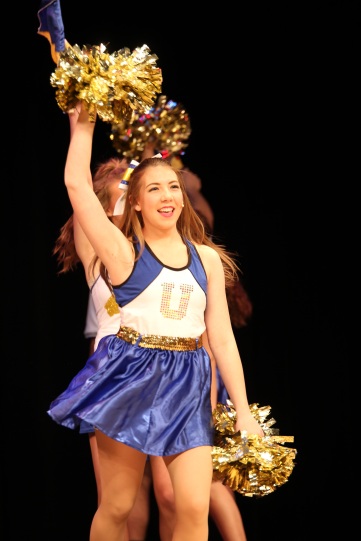 We had a total of 8 girls on the “dance team”.  Four of the girls did a tap dance (while Elle faked it) during the “may I approach” segment of the song.

We put our strongest dancers in this group.

The rest of the Delta Nu’s also came along with Elle.  They wore their costumes with added yellow zip-front sweatshirts with blue “U” emblems.  The girls had some blue felt pennant-style flags with “U” on them. 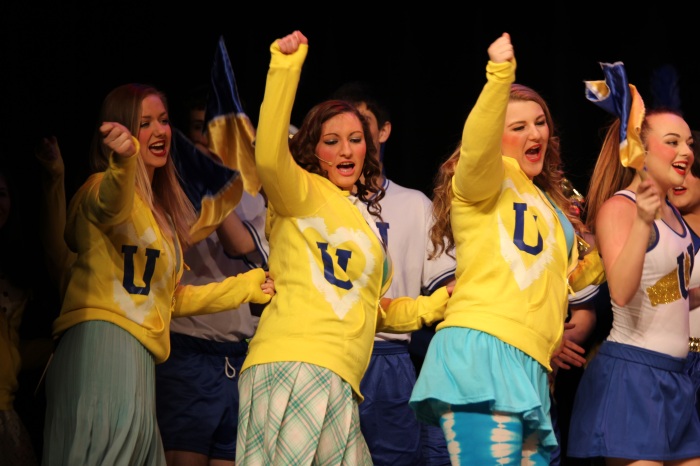 There were a few Harvard students who were excited by all the to-do.  They joined the party wearing a variety of maroon tops with yellow “H”s appliqued on to them.  Some carried maroon flags with yellow “H” emblems. 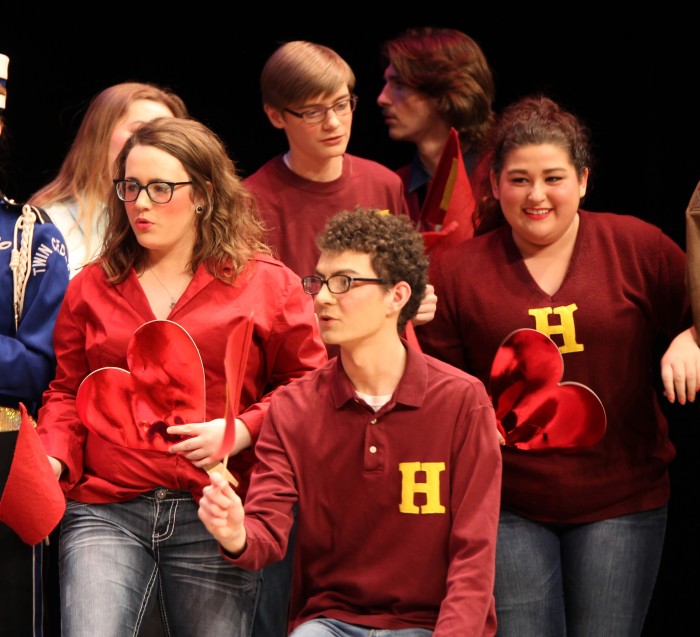 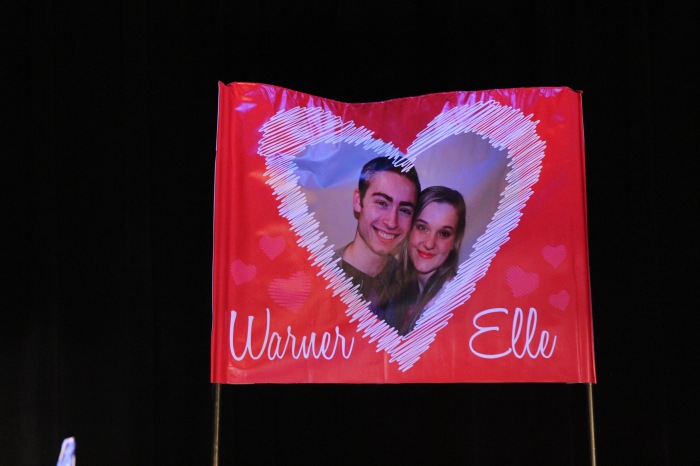 This was made of heavy vinyl with casings sewn on their side.  It is supported by marching band auxiliary flag poles.  This was raised during the “What about Love?” portion of the song.  At this point, the entire ensemble waved something in the air as Elle sang.  The raising of the banner never failed to elicit a wave of laughter from the audience.

I wanted to have a burst-through banner for this scene.  The cheapest option would be to make it out of paper. . .but . . . with dress rehearsals and shows, that is a lot of banners to make (and if you had them printed it would be cost-prohibitive, which leaves hand painting which is time-prohibitive).  I thought it would make sense to try and make one out of heavy vinyl or canvas.  Our local printed had some canvas, so we went with that option.  I did make one big mistake in that I just picked a size for the banner, and I SHOULD have found out the width of the printing base and designed the dimensions of the banner around that.  As it turned out, each panel of the banner had to be printed sequentially the long way.  It would have been much more economical to have them printed horizontal across the width of the printing material.  Since I was going to make the frame for the banner, I was flexible in the size.

I had the banner pieces printed in quarters.  It would have been more fun to have the banner have jagged edges when she burst through, but the printer didn’t have a good way to make that happen.  The banner quarters were printed so that there was a wide border around the edge.  At first I thought it would work to make a frame of PVC pipe, but, in the end I decided to go with a wooden frame for stability.  This made it relatively easy to wrap the canvas around the fame and staple it in place.

Initially the quarter pieces were cut out.  The inside edges were folded so that one side overlapped the other.  They were ironed down and secured with strips of heat & bond.  The far edges of of overlap were sewn together for added support. 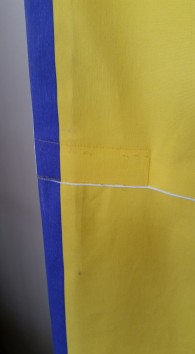 The overlapping areas were closed with a few small strips of velcro.  The banner closed at the bottom with magnets and a metal strip at the base of the frame. 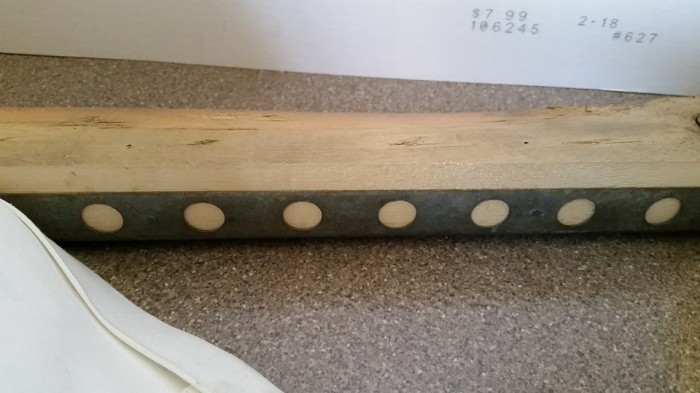 Once the four panels were sewn together, and the velcro & magnets in place, they were pinned together (to assist in supporting the velcro and magnets) carefully matching the printed design.  The panels were then stapled to the frame.  This process was facilitated by having several people to pull and hold the canvas while it was being stapled. 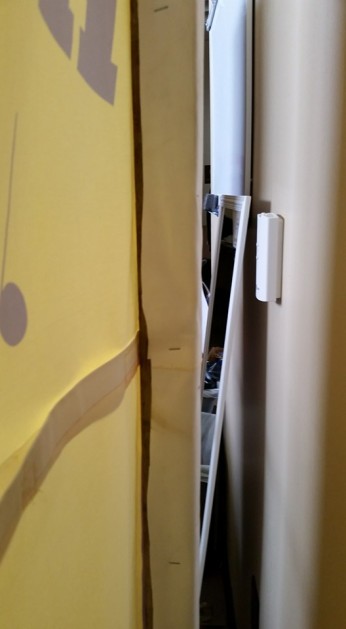 At this point, I was really excited because we could have a trial run-through of the “break-away” feature.  Unfortunately, all it did was split down the center like a door.  It was very anti-climatic.

I solved some of these problems by adding some velcro loops to the bottom to provide some resistance. 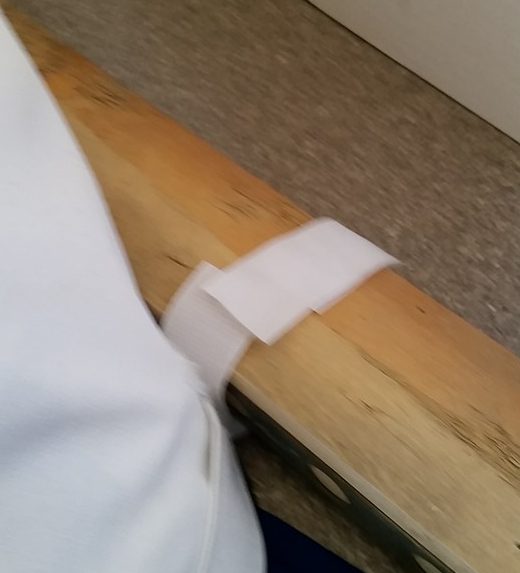 I also reduced the size of the velcro holding the flaps together by covering up part of it with white duct tape. 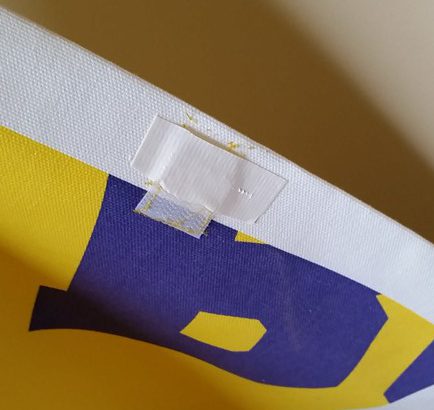 It truly was amazing how small the pieces of velcro ended up being! 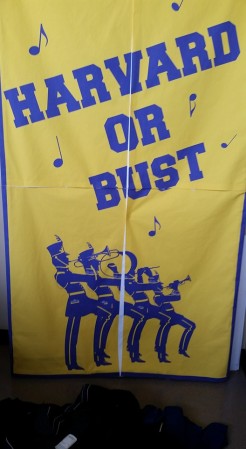 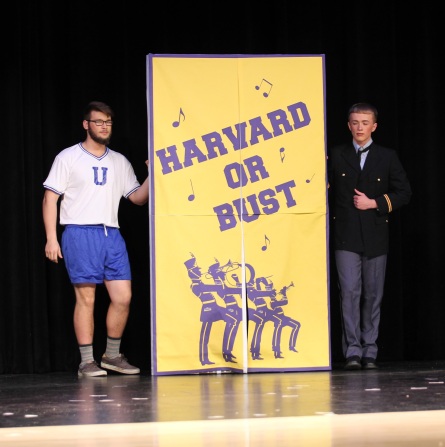 Overall I was please with how this turned out.  I would have liked the banner to be a little more paper-looking, but, this was fine.

2 thoughts on “Costuming “What You Want”: ‘Legally Blonde’”