The first step to costuming the Beast is to determine his character . . .is he Princely?  Evil?  Comical?  How close to “animal” is he?    My Director envisioned her Beast as Princely and more human than animal.  So, that shaped the way the costume was developed.

I have previously discussed the creation of the Beast Mask.

The next step is to create, or find, something to give the Beast a hulking shape.  The volunteer in charge of costuming the Beast chose to create a “pillow” that was strapped to the  shoulders & upper back.  The shape has flannel on the bottom to help it “stick” to the t-shirt the cast member wore underneath, and satin on the top to help his garments slide easily over the top.  A pair of suspenders was used to help secure it to his body. 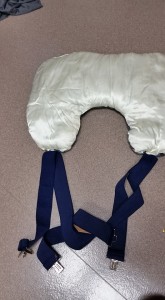 This piece was one of the first constructed as his Beast garments had to be sized to go over the top.

We elected to put him in a poet style shirt.  This has additional fullness in the back and some along the front, as well as being cut a bit longer than typical. 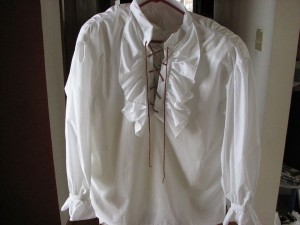 His first outfit was completed by a belted vest made out of a reddish patterned upholstery fabric remnant. The belt is actually the reverse side of the fabric. 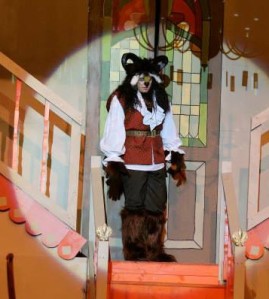 The “Beast” part of the costume was made of fake fur.

He had a neck piece.  This was visible in the opening of his shirt. 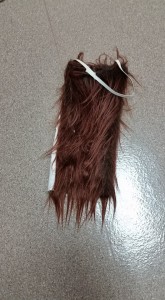 Leg “gaiters”, which were held up by elastic bands on the inside (velcro would also be an option) gave the illusion of breeches (which were worn by the villagers and other male characters).  An elastic loop (not visible) went under his foot to help keep it in place. 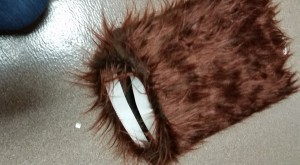 He also had fur covered shoes.  These were made by gluing fur to a pair of thrift store dress shoes.  There is a flap that secures with hoop & loop tape over the laces. 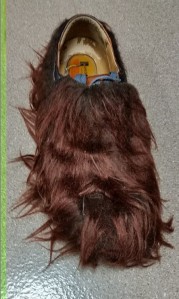 He also had cheap black work gloves with some fur glued on. 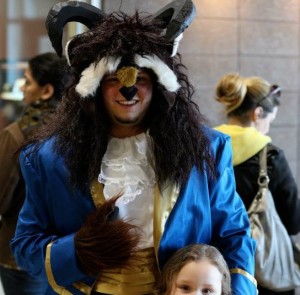 We elected not to have a tail, but that would easily be made with a bit of additional fur.

The iconic blue jacket required two identical jackets . . one that fit over the Beast hump, and one for his Human Again form.

The jackets are unlined.  Measurements were taken for the Beast jacket when the hump was in place.  The shirt & cummberbund are in one piece and are actually “false”, similar to a vest.  The cummberbund wraps around the waist and secures with hook & loop tape.  The shirt is a “false front” and an elastic that goes around the neck to hold it in place with hook & loop tape.  This facilitated quick costume changes.  The pants are high waist marching band pants, which he wore through the second act to facilitate the quick changes needed. 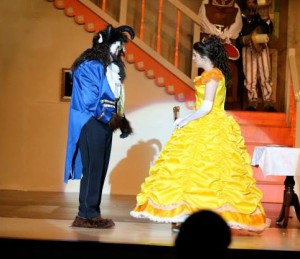 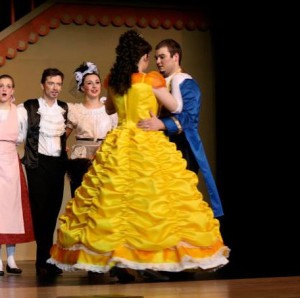 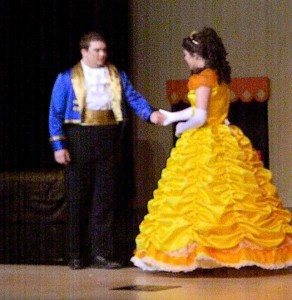 The Beast costume also included a cape for the fight with the wolves. 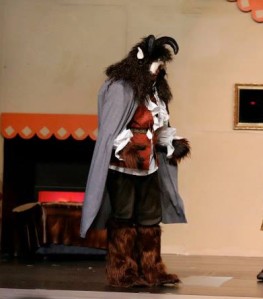 The cape was also a key component to the illusion of the Transformation.  For our show, the Transformation was done on a very simple scale.  Prior to dressing for the Fight scene, the main shoulder pillow was removed before putting the poet shirt back on, and a “false” pillow was secured to the cape with hook & loop tape. 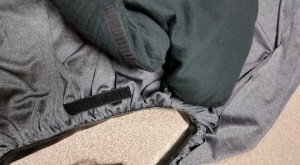 The cape with “fake” hump prior to the Transformation. 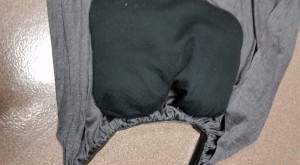 For our Transformation, the Beast merely removed his headpiece, gloves, cape and shoes as Belle looked on in amazement and the Enchanted Fairy twirled around and then whisked the discarded costume parts off stage.  Pretty low tech, but no one cared. 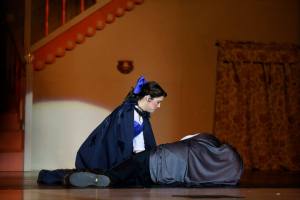 Laying with back to audience, beginning to remove Beast-wear, while Belle sings.

The Beast had a costume helper to facilitate the fast costume changes in the second act.  One person was able to do both the Beast and Belle, although it was easier with a second helper.

This costume has proved flexible enough in sizing that two other high schools have been able to use it, and the blue jacket was used for the Nutcracker in a community theater production.