Brooke  Wyndhams open the second act and takes it by storm!  She explodes on the the stage with an upbeat song and two-part dance number featuring (often) jump ropes.

Brooke is a Delta Nu.  She is older than Elle, and finds herself in jail accused of shooting her “60 year old stud”.  She owns a fitness empire and is the star of her own line of fitness videos.  She is not intimidated by “Blood in the Water” Callahan and refuses to be brow-beaten into confessing to a crime she claims she did not commit.

Brooke first appears in a live-action scene from her video tape, followed directly by a scene from the penitentiary where she is being held.  On the MTV Broadway version she is dressed in orange prison pants and an orange bikini-style top.  When the scene changes to the jail she adds an orange jacket.  I chose to do similar costume.

Brooke wears a pink top with green trim.  The orange pants were constructed by a volunteer.  Brooke did have some problems with her mic and the slippery fabric, so we added a topper of stretchy tan nylon to the top of the pants.   This was cut off the top of a “shaper” garment (found at at thrift store, this is a great source of sheer and/or flesh colored mesh). 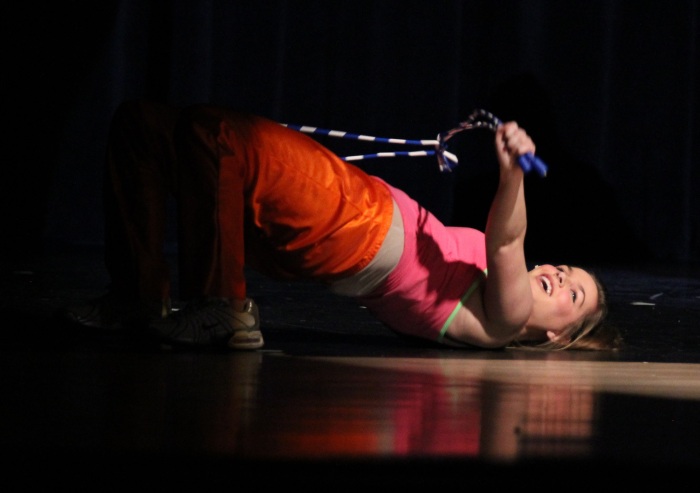 Her back-up dancers wore coordinating tops in green with pink trim.  These were purchased from Epic Sports (love that clearance section!).  The black sparkle shorts were purchased from BuyCostumes, which also has had some nice clearance items.  The shirts were only available in mediums.  I purchased several extra shirts, and was able to make a few shirts bigger as needed by splicing in fabric under the arms.  I also added black knit fabric to the top of the shorts if it was needed.  I happened to have a black drawstring & elastic waist skirt sitting in my sewing room–I just cut off the top 4″, sewed it on, and it was totally unnoticeable on stage.

This scene also had two guys as part of the “video” dancers.  They wore black shirts and lime shorts.  The shirts had “$19.95” added to them (my mistake . . it was supposed to be “$19.99”).  The guys had the idea that they wanted to rip off a cover to show the price at the appropriate time in the song.

I took some scraps of black fabric and sewed on stripes of the lime green fabric  (left over from altering one of the tops).  I sewed the bottom edge to the shirt, and then added several small velcro dot areas along the top.  This was a fun idea and easily added a little extra “pizzazz” to the scene. 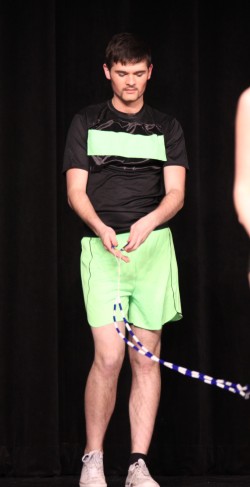 When the scene moves to the jail, Brooke adds her orange jacket.  This was constructed without buttons/button holes as they would not be used.  One of the back-up dancers brought it out.

While Callahan and the law students discuss the case (as Brooke freezes onstage) the back-up dancers quickly changed into their jail outfits.  The tops were pull on-pull off styles, and the pants pulled on over the top of the black shorts.  The striped tops were embellished with the word “JAIL” in orange glitter.

One of the adjudicators didn’t like the word “jail”, and I agree to a certain extent, however, I wanted something that was large enough for the audience to read.  “Boston Women’s Correctional Facility” would be awfully small letters, and “BWCF”  wouldn’t mean anything unless the audience was really good at picking things up.  One idea would be numbers, but, they would all need to be different which would have been more labor intensive to have cut out.  So, while I agree maybe ‘JAIL” wasn’t the best choice, I don’t know what else I would have chosen.

The girls wore two versions of orange pants.  The choreographer had included a kick routine along with the jump roping, and those dancers wore tighter orange leggings.

The two boys were initially only included in the exercise portion, but, they were having so much fun that they asked to be in the second part.  The director suggested dressing them as guards.  We purchased blue police style pants on Ebay, and added a navy blue t-shirt with “GUARD” on it. 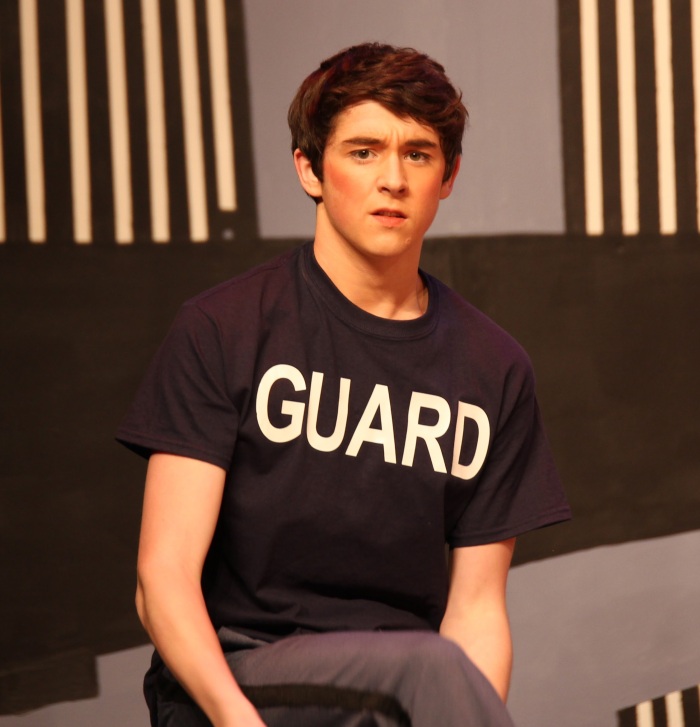 These guards were then able to move on a lunch table for the lawyers to meet with Brooke, which worked out really well for staging. 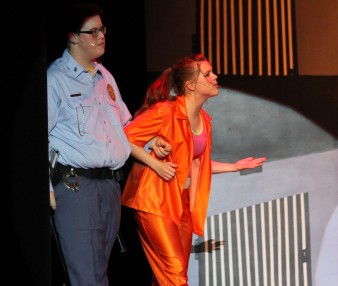 The main guard is dressed in the same pants as the two in the dance.  He wears a blue shirt and other police type accessories.

The next time we see Brooke is at the first installment of her trial.  Appearances are clearly important to Brooke, so we know she would want to dress well.  We also know she has plenty of money.  A decision has to be made on what her image is beyond that–sophisticated?  business-like?  trophy wife?.  I felt that Brooke would try to dress appropriately for court, but, probably would miss the mark just a bit.

I found a brown & white polka dot Banana Republic wrap dress.  We opted to shorten the dress to give it a less conservative edge.  I also chose red accessories (necklace, belt & shoes) to contrast with the neutrals the lawyers are wearing.  The dress has the requisite neutrals, but she couldn’t resist the pop of red and the short skirt.  Finding those red heels made me crazy!  I knew I wanted red heels . . the first pair lost the little base of the heel (and I had nothing to repair it with), the second pair I had donated was too big . . . yes, I had some nice beige pumps, but they just weren’t as good.  I FINALLY found a red pair the week before the show . . . wish they’d have been a few $$ cheaper, but they were totally worth it for “making” her look.  A nice red lipstick further completes the image. 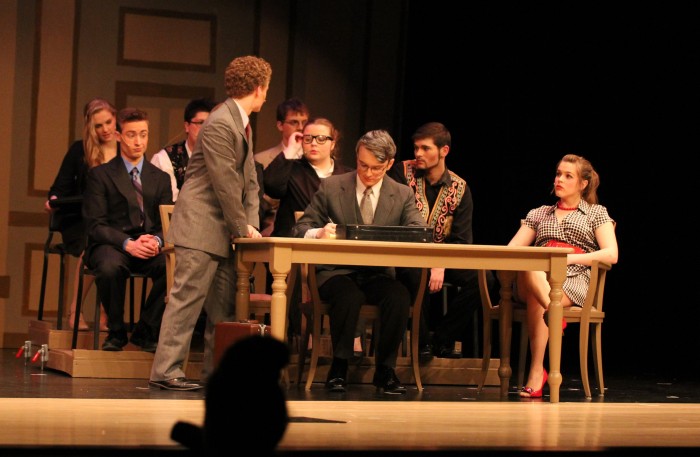 For the closing scene, Brooke is in all of her glory, firing Callahan and supporting the newly liberated Elle.  Since I had picked polka dots for the first dress, when I came across a green & black polka dot Kim Kardashian brand knit dress I knew I had found the perfect costume.  We added black platform pumps, and she was ready to rock the world.  You can just see Callahan cringing . . .Brooke is so outside his “box”.

This was a really fun dance sequence and character to costume.  I did have some second guessing about the black & white striped jail tops, just because it isn’t what is typically done.  I really like the visual though, and how they with the horizontal stripes of the jail backdrop.