One of my friends is costuming “Fiddler on the Roof” this fall.  This is a new musical for me (well, to costume . . . my kids were chorus members years ago 10-12 years ago).    I began by doing an image search of the costumes, as well as looking for costume plots.  I also hope to find a copy of the script . . . I can order one from Europe via Amazon, so that may be my next step.  “Fiddler” takes place in Imperial Russia in 1905, so I also image searched using those keywords.

My project right now is to begin to figure out a “look” for the chorus using thrifted garments and fabrics.  I want to be able to send my friend pictures of some prototype ideas so that I can make sure that we are envisioning the same look.  “Fiddler” chorus costumes tend to have the same general theme:  skirt, blouse, apron, head scarf, and possibly a vest/corset top.  The colors are often neutrals and earth tones, but can get quite bright–and it looks OK.  Prints, stripes and plaids are often used in combination.   Skirts can be plain, but are often decorated with borders of tucks, trims or prints.  Blouses can be utilitarian, but can also have prints and trim.  In contrast, some casts are dressed in very monochromatic shades of grays/blues etc.

My vision is using earth tones and trying to add details that give an Eastern European feel to the costumes.  I’m also working on ways to upcycle, as well as make flexible size costumes, since the show hasn’t even been cast yet.

For this project, I began with this men’s shirt: 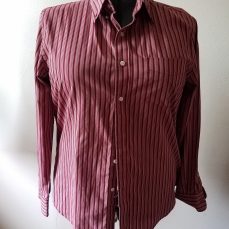 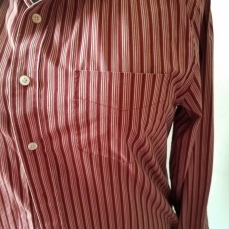 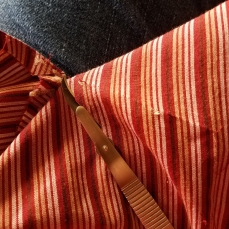 This is your basic man’s shirt, with a banded collar, button front, button cuffs and front pocket.  I began by removing the pocket (using a seam ripper).  Next, I cut the collar off, leaving about a 3/4″ rim.  I folded this to the inside and sewed it down.

I removed the collar stay-down buttons, and the cuff buttons.  I folded the cuffs in half to make them narrower, as I think this helps the shirt look less like a modern mans shirt, and trimmed the collar and cuffs with crochet lace.  I replaced the cuff buttons with hook and loop tape.  The collar button I pulled through a small snip in the lace, and then stitched around the button-hole and cut a slit in the lace.

I paired up my remodeled blouse with a crinkly linen-look cream elastic waist skirt.

I had a woven striped skirt to use for the apron.  The skirt had a front wrap, so all I had to do was trim away some of the top facing.  The back was shaped with darts, so I either had to work around the darts, or cut the top of the skirt off at the level of the darts.  I just left them in. 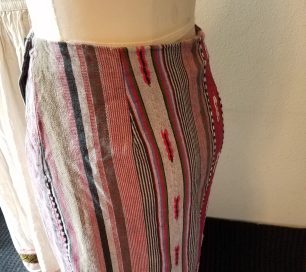 I decided to add a border to the skirt.  I found some dusky pink lace and olive-green braid.

To sew the rows of border on, I begin by deciding where I want the first row to be.  I either make note of some landmark on my sewing machine to line the edge of the fabric against, or, I stick a piece of tape to the machine.  Once the first row is on, the subsequent rows are lined up accordingly.  It doesn’t have to be perfect.  Below is the costume so far.  This isn’t a bad costume just this way.  I wouldn’t want to leave the elastic as that is a modern look, but the blouse and skirt look good.

I decided to use some wide grosgrain ribbon for the apron support and ties.  I trimmed the top facing off the back of the skirt as leaving it made the top very bulky.  Next, I pleated the skirt to the ribbon and then stitched it secure.  I had just enough ribbon. 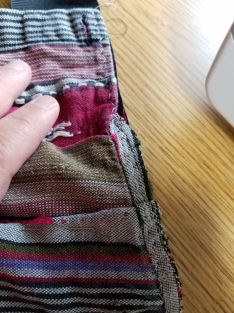 I really like how this apron turned out.  The darts make a few spots hang a bit off-grain, but, it doesn’t bother me.

The blouse can also be worn on the outside, which gives a different look.  When I decided this might be a possibility (and many “Fiddler” costumes show blouses worn on the outside of the skirt), I trimmed the shaped hem off the skirt and re-hemmed it.  A little elastic at the waist wouldn’t hurt to shape the back, but, I’d wait to measure the actual cast member who will be wearing it.  It also might be a bit long. 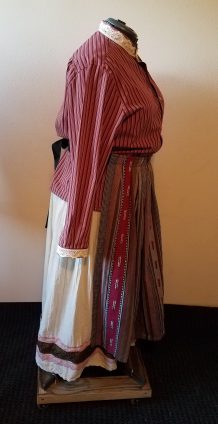 My daughter came home from college to spend the night with me (we went to see the movie of the Broadway production of “Bandstand” . . oh my goodness . . if you ever get a chance . . go!  It was so good!) so I persuaded her to model a few things for me.  So . . here is the costume being worn:

Then, a couple of tucks are pinned over the shoulders to pull the fabric up:

This pulls the armscye higher on to the shoulder which shortens the sleeve and creates a more defined shoulder.  If I were fitting this on her for a show, I might also take a tuck/pleat in the center back to pull out some of the excess fabric.  These can be basted in with a large stitch and then easily removed at a future date.

I’m not sold on the back of the blouse, but, this was a fairly quick upcycle, so I’m OK with this for now.

Cost:  I needed a man’s shirt, two skirts and some trim.  In my area, I could possibly find the thrifted garments for as little as $1.50, or at full “goodwill price” it would be around $12, plus the trim.  I’d also like to see a petticoat underneath, just to help the skirt hang a little better, especially if this were worn by a main character.

So . . after playing with costumes, we went shopping . . looking for an interview suit . . instead we found shoes!  Who doesn’t need pink satin boots???!!!  Wouldn’t they be great for Elle Woods?  Unfortunately . . we left them in the store, along with the pink glitter platform sandals and the $400 blouse with MASSIVE “wired” ruffles that were done with something like plastic boning in tube of stretch knit.  I should have taken a picture. 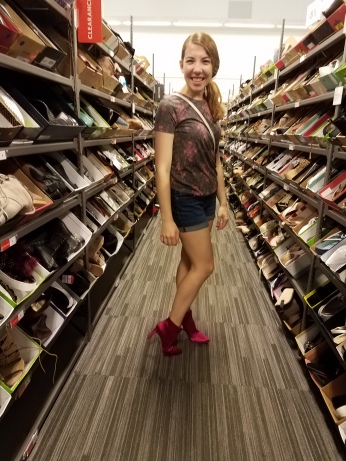 I DID take a picture of these cool sleeves.  I could have used this idea for the Bombie Samba.  The fabric is tacked together to make these mock-ruffle layers, similar to how the ruched skirts on Prom/wedding dresses are made.  It would take some playing around with, but, it is an interesting technique.  It did not have a lining, but that would help support the fabric and add durability.   This shirt was orange like a construction pylon. 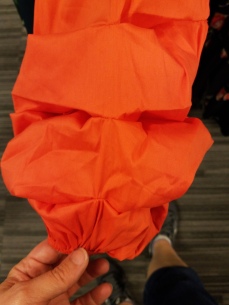 3 thoughts on “Fiddler on the Roof: Peasant Dress #1”