The villain of “Beauty and the Beast” is Gaston, and he spends his free time hanging out in his tavern.  This is also where he plans his dastardly deeds.

In the opening there is a little ditty and the Tavern Wenches do a little dance.  I wanted them to have a prop to dance with.  I had an idea of mugs.  I had found a few plastic mugs, but, I was not having luck finding ones that I thought would be someone period looking AND would be in my price range.  I was open to either trays filled with mugs or mugs they could hold in groups by the handle.

I did find some wicker trays, which were definitely better than the other ones I’d been finding.  And, as I was trying to figure out how to paint/create something pewter looking, I recalled we had some leftover gray stiff foam tubes that had been donated for a different costume project.

I cut the tubes in about 6″ lengths, and used expanding foam insulation  (the kind that comes in a spray bottle with a skinny nozzle to squirt it into cracks) and sprayed “foam” on the top of the “mugs”.  I didn’t have handles on them, but I thought, just sitting on the trays, it didn’t really matter. 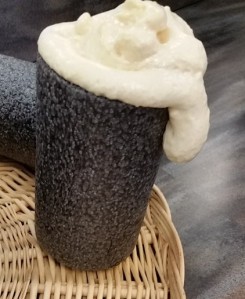 I hot glued small pieces of velcro to the bottoms of the “mugs” and then to the wicker trays. 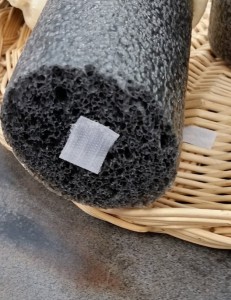 The mugs kind of wobbled on the trays, but, from a distance, and while the girls were dancing, it was going to look OK.  I was actually pretty happy with how they turned out . . . but what happened after really made me believe in the power of a prop.

The first time the girls did their little dance with their trays, as they finished and started returning to the “group”, the chorus members started grabbing “mugs” covered with “foam”.  Suddenly, what had been a pretty flat scene . . remarkably . . .  they ALL perked up.  They smiled, they interacted, they drank their ale, the song gained life and the tavern came alive.  But what was even better was that they began to step it up and be creative in their own right . . .someone brought a deck of cards, a few of them started walking around the stage to talk to friends, they began to ACT.

Tavern wenches, after dance, with trays of mugs on the table. 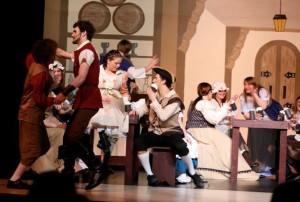 You will also note that Gaston & the Silly Girls have a different sort of mug.  These are plastic drink mugs (that have liquid sealed between two layers).  These mugs are lined with a camel-colored felt, and filled with lightweight plastic.  They have foam glued to the top. 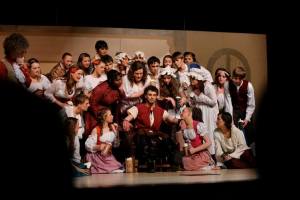 Things I might do differently:  I would cut a cardboard “liner” for the wicker trays and glue that down to the inside.  Then, I would put the velcro on that.  This would eliminate the “tipping”.  I also would consider trying to use magnets to attach the mugs to the tray.  This would eliminate the “ripping” noise of the velcro.  If you glued the magnets/or something metal to the UNDERSIDE of the cardboard (and put little “x”‘s to mark the spots) and then glued the magnets to the bottom of the mugs . . hopefully they would hold, and detach easily.  It might take a little experimentation, but, I think it would work.  You could even hollow out a bit of the foam  on the bottom, depending on the size of your magnets/metal.  You could do magnet-to-magnet, or magnet-to-metal.

I also could have used a matching gray for the plastic mug liners, OR spray painted them.  This was a really quick, last-minute prop addition, so I used what was fast and what I had.