If  you’ve been following my ball gown creation endeavors, you know that most of the gowns I have made have been a combination of two or three different dresses.  This project was a little different in that I only used one dress plus some additional fabric.

The dress I found was a royal blue, very full skirted dress with a handkerchief styled skirt. 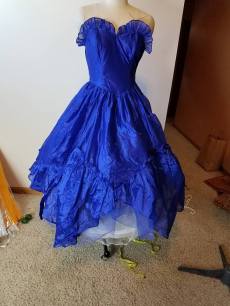 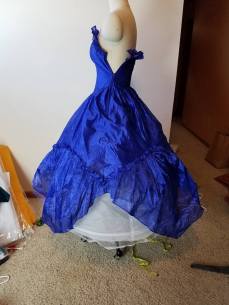 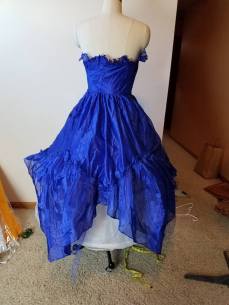 I am showing it over a hoop.  It is for someone who is smaller than my dress form, so the top will remain open during the upcycle.  The dress has some age on it.  It is a lightweight slightly ribbed fabric of some sort of polyester.  The dress has a side zip and had been previously altered (not well), so possibly had been used as a costume (white thread, what can I say?).

I needed the bodice to be a bit larger, so I took the tuck out and found this: 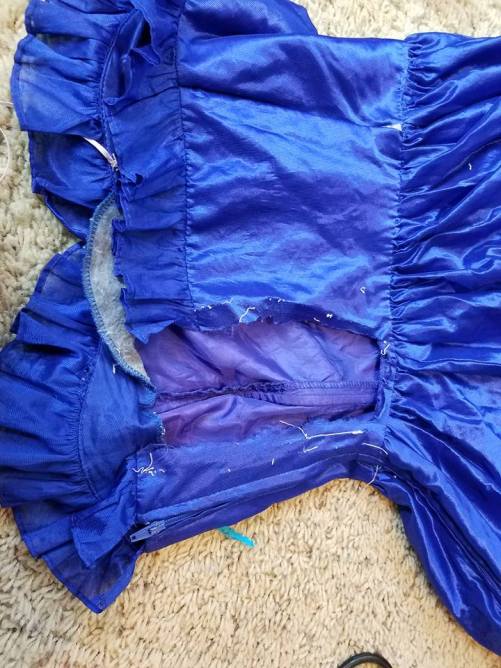 I really would like to have seen how this looked when it was worn.  To remove a large piece of fabric, on one side of the bodice . . how did that pull the sides?  Maybe it worked because it was strapless dress?

At any rate . . obviously I needed some extra fabric.  Fortunately, the dress had some self-fabric bows on the skirt. 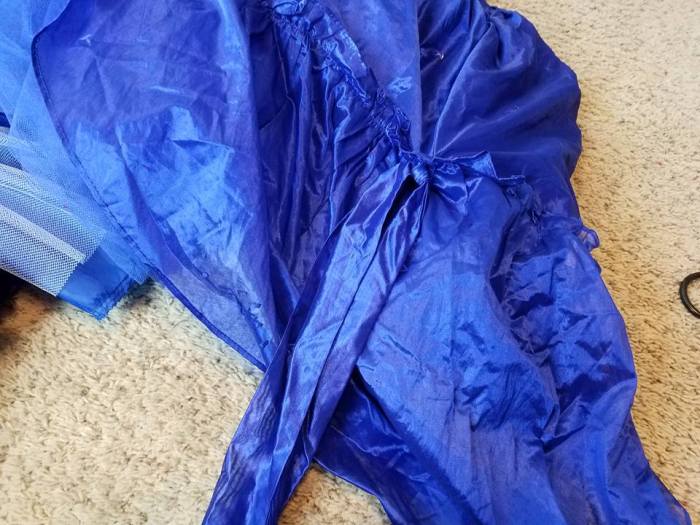 I cut one off and appliqued a piece of it over the hole.  I just left the top edge level with the ruffle and from a distance it just blends in and you don’t even notice it is not actually ruffled in that spot. 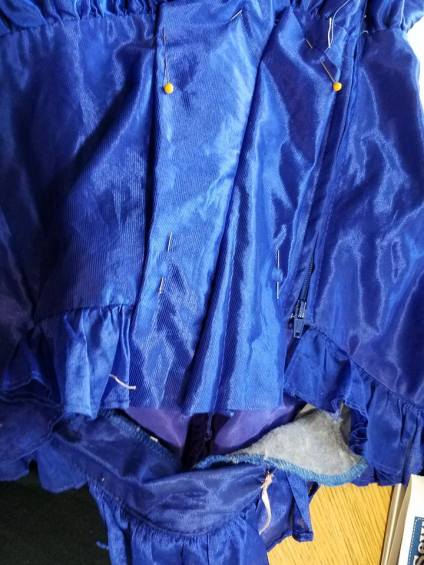 I wanted to add a lower skirt. The dress had several layers of tulle underneath, and a lining.  I thought it might work to sew a ruffle on to the lining.  I had a bolt of blue satin left from costumes I made for “Legally Blonde”.  It wasn’t the exact same blue, and I really wanted the handkerchief hem to show and had the idea to mix it with organza.  I had previously ordered some hemmed organza from TulleShop (the same place the satin had come from).  It comes in a package 58″ wide, 10 yards, hemmed for $4.50 + s/h. 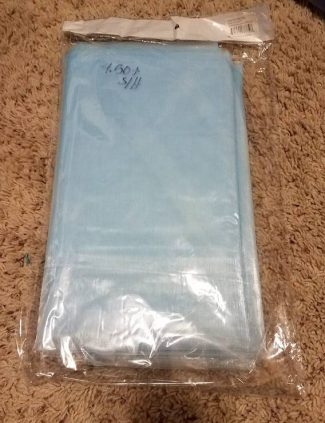 I roughly wrapped a tape measure around the level of the skirt where I wanted to sew the ruffle on.  It was 90″ in circumference.  I thought a nice ruffle is double the distance, so 90″ is about 3 yards, so double would be about 6 yards, so I just used the 10 yard piece.

I cut a 5 yard piece of the blue satin, and cut it in half lengthwise, that way I had the selvage on each side to use as the bottom and I didn’t have to hem the skirt.  I stitched the two pieces into one long strip. I folded the organza in half and pinned it to hold in place.  Initially I sat down to sew it without pinning, but, there was no good crease in place where I needed the fold, so I knew it would shift, especially with all of the weight hanging off the table.  While it seemed overkill to fold and pin all 10 yards, I knew it would be worth it in the end.  Once pinned, I basted the organza to the satin strip. 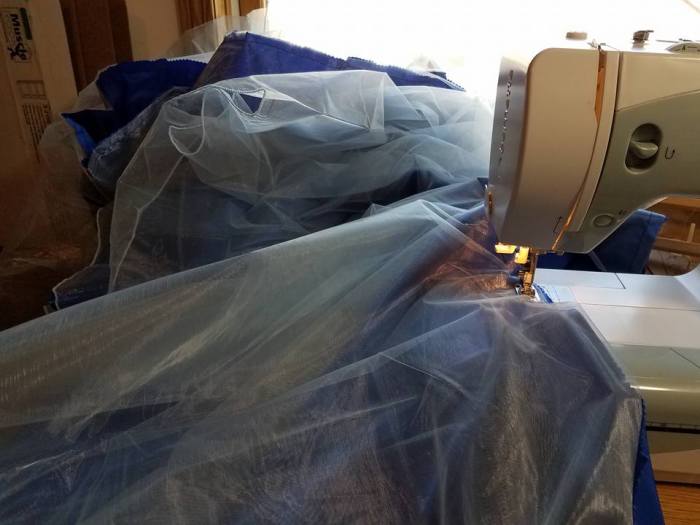 I decided I would squish gather the ruffle on to the skirt.  I drew a line on the underskirt measuring down from a seam to create a “sewing line” so that the bottom hem would be even.  Then I pinned the ruffle piece on evenly.  If I were going to do this again, I would start by doing some math . .  . if I measured the circumference of the skirt and divided it into, say 6″ segments, and figured out how many of them I had, and then I divided the strip into an equal number of sections I could avoid pinning the whole thing, and just ruffle section-by-section. 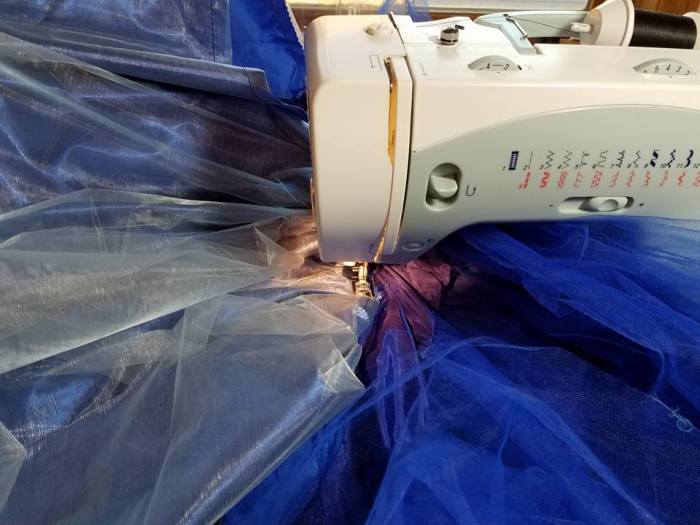 I took the second bow off the skirt and made straps.

I wanted some sort of embellishment on the dress.  I had a piece of organza left (my 10 yard pieces were a little off).  I had some lace.  I had some of the blue satin.  But I just wasn’t inspired.  Then, I remembered I had ordered an embroidered motif awhile back, just to see what I would get.  These things are pretty cheap, often described as “patches” or “lace”.  This one was a sew on one,  but some say they are iron on.  I think this one cost about $6, but many are in the $2-3 range.  I pinned the motif on, and then sewed it on by machine.  I didn’t do a particularly careful job, just wanted it stuck down.  I may go back with some fabric glue for the little loose parts, or it might be just “good enough”, due to time constraints.  Ideally, I would have hand sewed it on.  I think it also might be fun to add a few hot press jewels in the flowers. 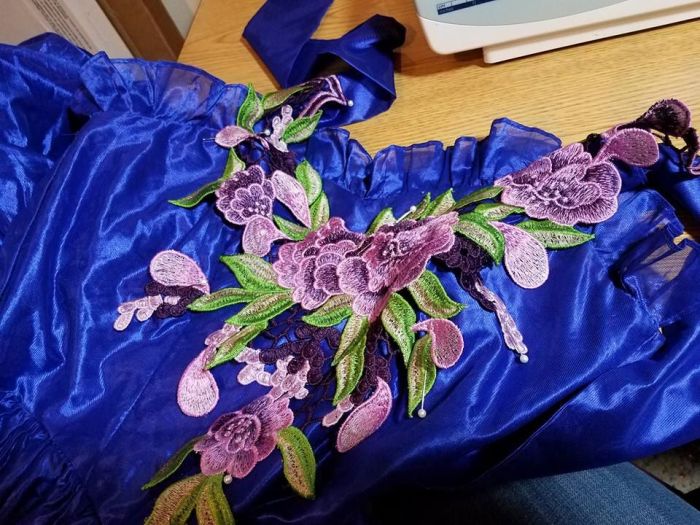 And here is the dress: 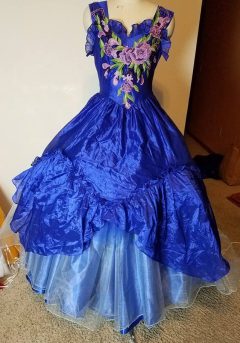 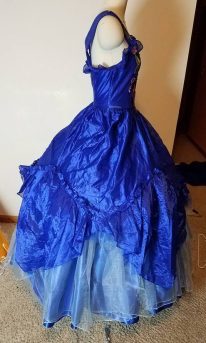 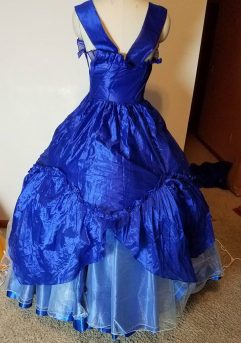 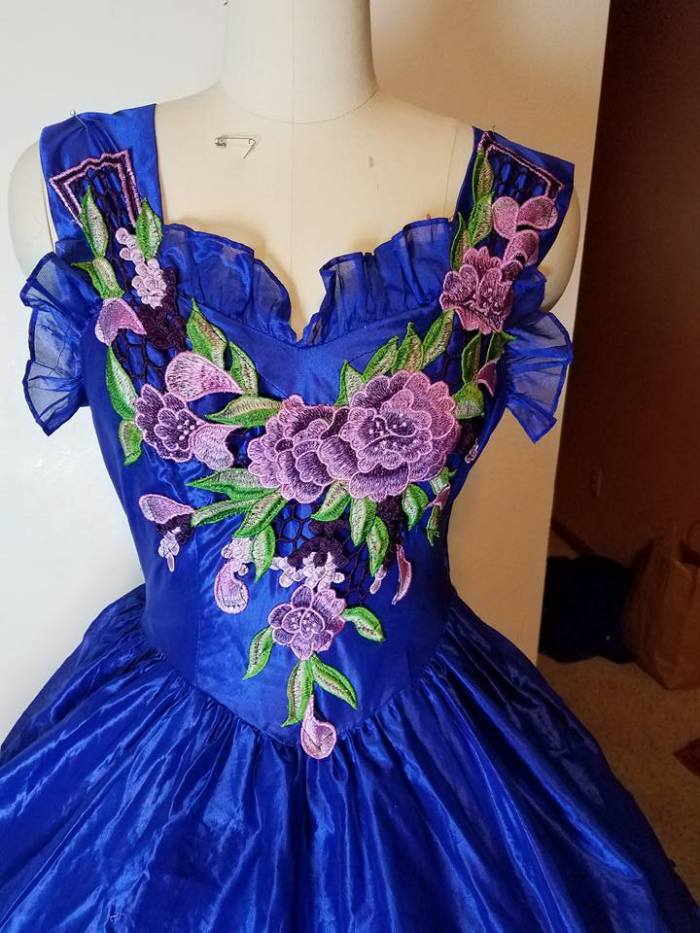 The dress needs a good pressing or steaming.  Looking at it now, I also think it could use some purple bows on the skirt . . . maybe I’ll have to add those 🙂  I didn’t put sleeves on this one, as the straps are fairly wide.  I think  a narrow purple ruffle around the bottom of the skirt would also be pretty. 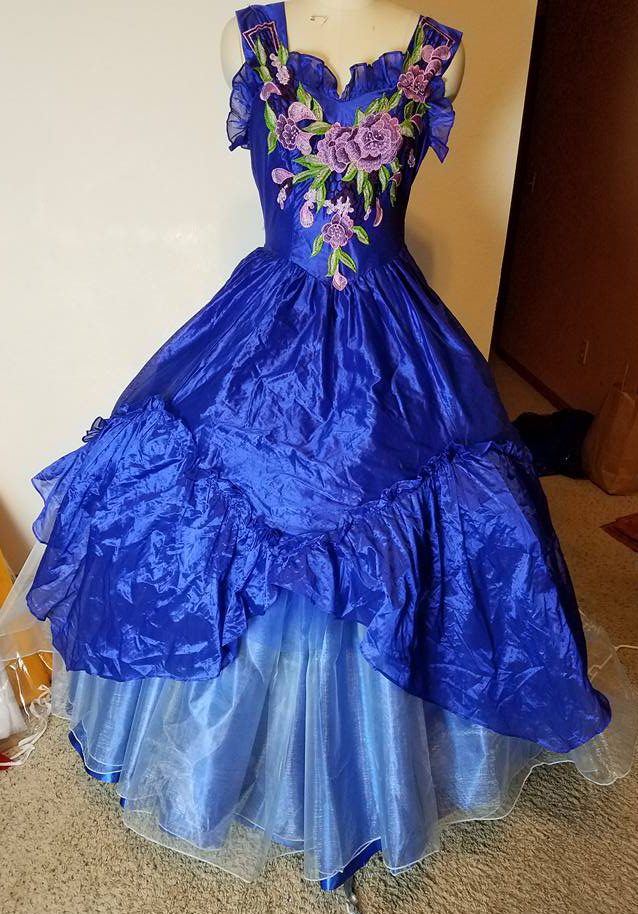 One thought on ““The Prince is Giving a Ball”: Royal Blue (single dress upgrade)”