In this new version of “Cinderella” the character of “Prince Charming”, aka Topher, has been developed beyond his usual one-dimensional stereotype.  His parents were written out of the new script (which is a bit sad, as they had some great songs and lines in the older version) and instead his parental figure is the evil, ambitious Sebastian.  The audience is introduced to Topher as he is coming back to take his place on the throne (after growing up an isolated life attending a boys school on an island).   As the show progresses, the audience watches Topher grow up and mature, moving away from dependence on Sebastian, to take an interest in his country, and become his own man.

In the opening scene of the show we meet Topher as he is traveling with his men and slaying beasts and dragons, as Princes are wont to do.  I wanted to dress him in a suit of armor.  Initially, I looked for metallic and chain mail printed fabrics (harder to find than you would think, and expensive when you do), and even experimented with sewing aluminum foil on to fabric to try to make armor for Topher and his soldiers.  There are quite a few tutorials out there on how to make armor out of all manner of things such as foam, cardboard, paper mache, etc.  As with many things, to make one outfit could be a labor of love . . . making 10 or 12 . . not so much, and then there is the cost . . .

As luck would have it, Halloween was rolling around, and one of those pop-up costume stores was due to close shortly thereafter.  I found this costume which retails for about $70 which is more than I typically spend on a single costume, but, the day after Halloween at 50% off . . .$35 sounded pretty good me, especially as my volunteers were dwindling. (The shield is a thrift store find we ended up not using).  I begged my daughter into going to pick it up for me . . . and there is an amusing tale about her horror at the Black-Friday like crowd of interesting individuals waiting at the door to burst into the store and scavenge the bargains (she bought the costume, but drew the line at joining the throng, lol). 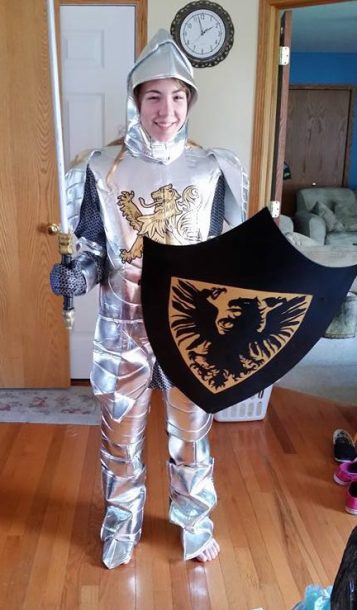 What was really interesting about this costume is that it had a chain mail print accessories.

I had searched and searched for chain mail print fabric–you’d really think it wouldn’t be THAT hard to find.  After eventually finding it, I decided I couldn’t afford it, so, I was really excited about this fabric, and guess what?  On stage . . you couldn’t see it.  So . . for a stage production, especially from anything but the first couple of rows, not worth it.  The costume on the far left is a commercial costume that uses black mesh for the chain-mail look of the sleeves, which is also not visible from much of a distance. 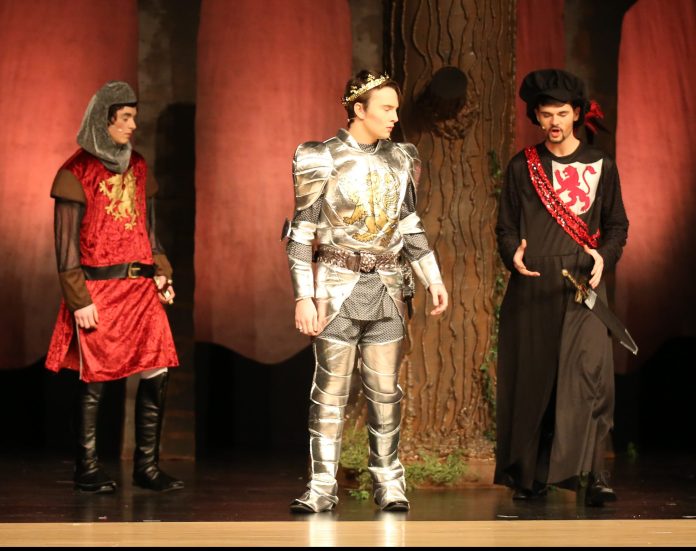 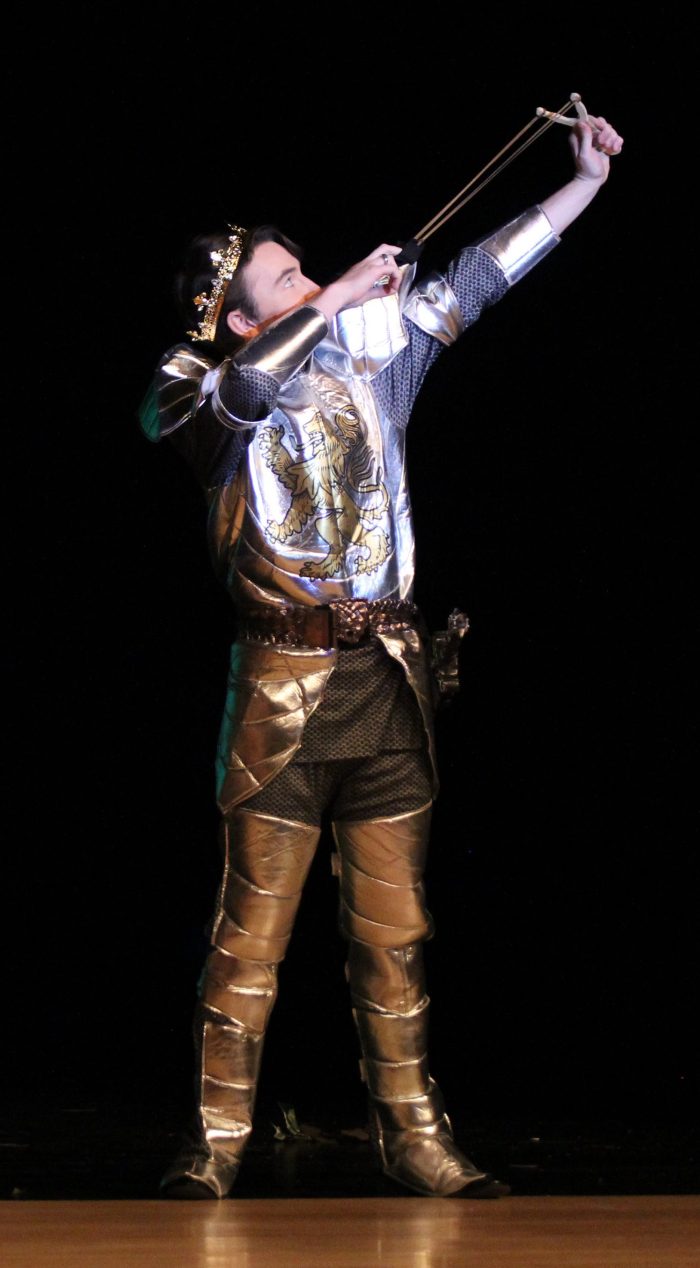 We did not use the helmet, instead Topher wore his crown (available on Ebay for about $20).  The crown did lose a few jewels during one rehearsal when Charlotte shoved Topher with her foot just a little too hard after she tried on the shoe . . .after that he held on to his crown, and a little glue fixed the problem.

The sword was a last-minute purchase from Amazon.com.  The belt was made from two matching thrift store silver belts.  The sword had a “sheath” included.  I cut this apart and stitched it to the belt.  I added a  loop in the back for the slingshot (also purchased from Amazon), and made a “pocket” out of grosgrain ribbon, the end of a belt and a snap.  Topher used this to  store the coin he offers Ella.

The sword was decorated with a skull, and I covered that with some gems (glued on with E6000 glue) and also added some along the side of the blade.

I would not say this was the be-all-end-all of costumes as it looks costume-y, but for the price and being able to easily cross a costume off my list–it worked.

I was fortunate to be able to rent the formal jackets and breeches for most of the guys from another area high school.  The jackets were made using this McCall’s pattern. 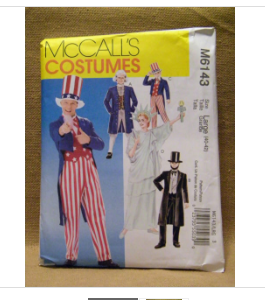 I was able to use three of their jackets for Topher, which was a wonderful help.  In retrospect, it might have been nicer if they had been altered to fit him a little better, but, at the time, with all the other tasks pressing, they seemed “good enough”.

The cast member playing Topher really wanted boots and so we settled on these “tall brown costume boots”.  We found them to run a little big, and I had to reorder these in a small size.  They lasted through the show, and were comfortable for him to wear.

In addition to his jackets, Topher had a white poet style shirt, a vest and pants.  Although most of the men in the show wore breeches, we went this a longer, slimmer style of pants for him.   These are actually women’s pants, tailored slimmer through the legs, in a textured tweedy sort of fabric.  The vest has a shawl collar, and again, was tailored from a women’s fit.  He wears a lace jabot with the shirt.

The first jacket he wore for the Throne Room scene is the one above.  It has a dark blue background and a dramatic pattern.  This was the only jacket we rented with such a bold pattern, so it worked very nicely for Topher.  I think it also helped give him a more foppish, frivolous personality to set up the maturing of his character.

After the ball, he switches to a yellow-green jacket.  The plainer jacket was more appropriate for searching through the woods for Ella.  It  also was more in-line with his move to connecting with the Villagers.

It also toned nicely with the gold dress Ella wore: 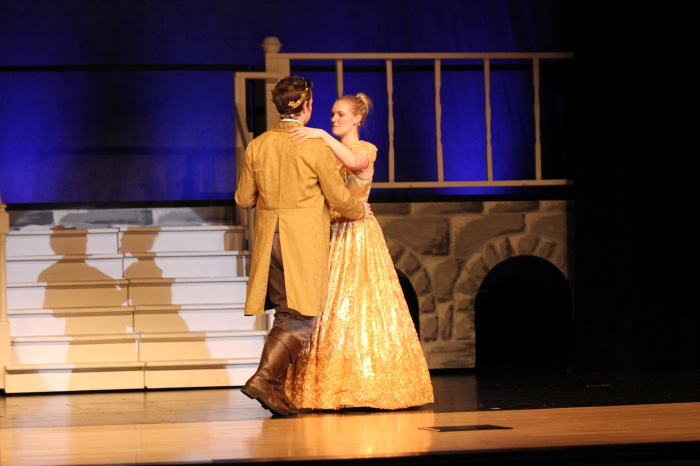 Topher  wore a rented ensemble for the Wedding Scene:

He easily could have worn his outfit from the Ball for the Wedding . . but where is the fun in that?  This outfit also could have worked for the Ball, bu I wanted something a little whiter and a little fancier.

The Ball Outfit was made by two volunteers.  The volunteer making Ella’s dress for the Ball was not sure there would be fabric left, so, we used a random detachable train ()from a thrift store) as the source of fabric for the jacket ($2.88!).  The jacket was made with the same McCall’s pattern as the rental jackets.  The jacket was inter-lined with petticoat net to give the fabric extra body.  We harvested trim from a vintage wedding dress, ($6) which, unfortunately I did not think to take a picture of before we cut it up.   The dress had an empire waist, with a sheer overskirt trimmed with white and silver embroidery.  The overskirt opened up the front, and the embroidery followed the line of the overskirt and began narrow at the center front and widened as it reached the bottom of the hem.  It worked just perfectly for the sewer to remove the trim, and replace it on the front of the jacket. 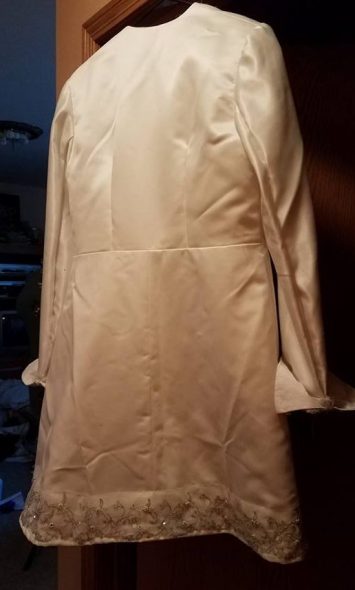 We used the same trim on the breeches.  We chose a pattern for a slim fitting pair of breeches and used a white-on-white stripe.

A matching vest with attached jabot completed the outfit:

In theory Topher was supposed to wear this vest on the outside of his pants, but I see now from pictures he had it tucked in.  It looked fine, so I guess whatever works, lol.  He finished the outfit with white socks and white jazz shoes.  He would really have liked white boots, but, if you don’t want Storm Trooper or platform go-go boots, they aren’t easy to find. 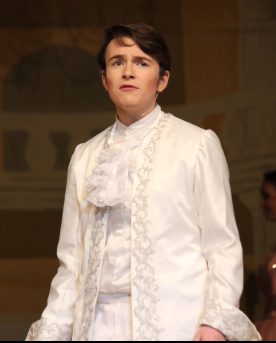 We really loved the Ball outfit.  The trim from the wedding dress could not have worked out better and the way it tapered and fit just perfectly on the jacket  was one of those secret pleasures known only to upcycling costumers.

If I were to re-costume the show, I would try and spend a bit more time on the fit of Topher’s jackets.  However, at the time I was just happy to have something to give him to wear!