If you have been reading my blog, I discussed some of my decision making process regarding armor when I posted about  dressing Topher.  Prior to that, I had spent quite a bit of time searching for inexpensive armor both a year ago when my sister was costuming this show, and then again in the fall when we were prepping for it.  What I could find looked more Roman Gladiator,  modern Batman, or even Stormtrooper than what I was looking for . . . and if I could find anything the shipping was prohibitive, or it was more plastic-y than I thought I would like.  Long story short, I ended up ruling out purchasing armor.

There are many tutorials online to make your own armor.  The supplies range from excercise mats, to cardboard, to paper mache, to duct tape . . . if you can think it, you can probably do it.  As with many projects, making one for a cosplay costume is different than making ten, especially when I was lacking volunteers.  Another consideration was the wear and tear that would occur during our weeks of dress rehearsal and the show, and the “care” teenage boys tend to give their costumes (did you see my eyes rolling there?).  The Knights in the Broadway show wear an outfift inspired by Conquistadors, complete with the distinctive helmet.  I had about settled on sewing a padded silver vest, when I happened to find these costumes on clearance at Halloweencostumes.com for $15 each.  I had to buy size large, but, I decided they would do. 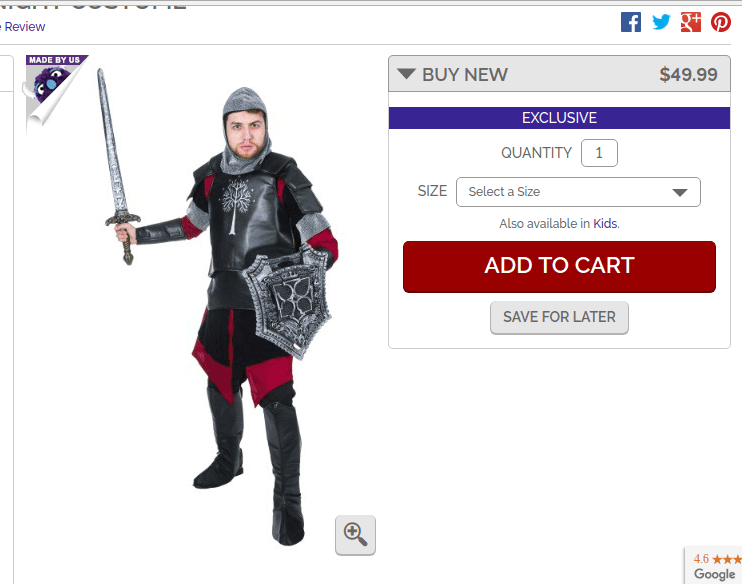 These were actually really nice costumes.  The chest pieces were a bit big on my cast members, but, we just called them “good enough”.  We did resew all of the side straps, and replaced one side with velcro for easy on and off.  The boot covers ran small and we needed to add a strip of fabric to the back to make them a bit wider.  I imagine that is why they were on clearance.  We made the Knights gray breeches to go underneath so that they could wear them in the village scene if needed, and also for the final wedding scene. 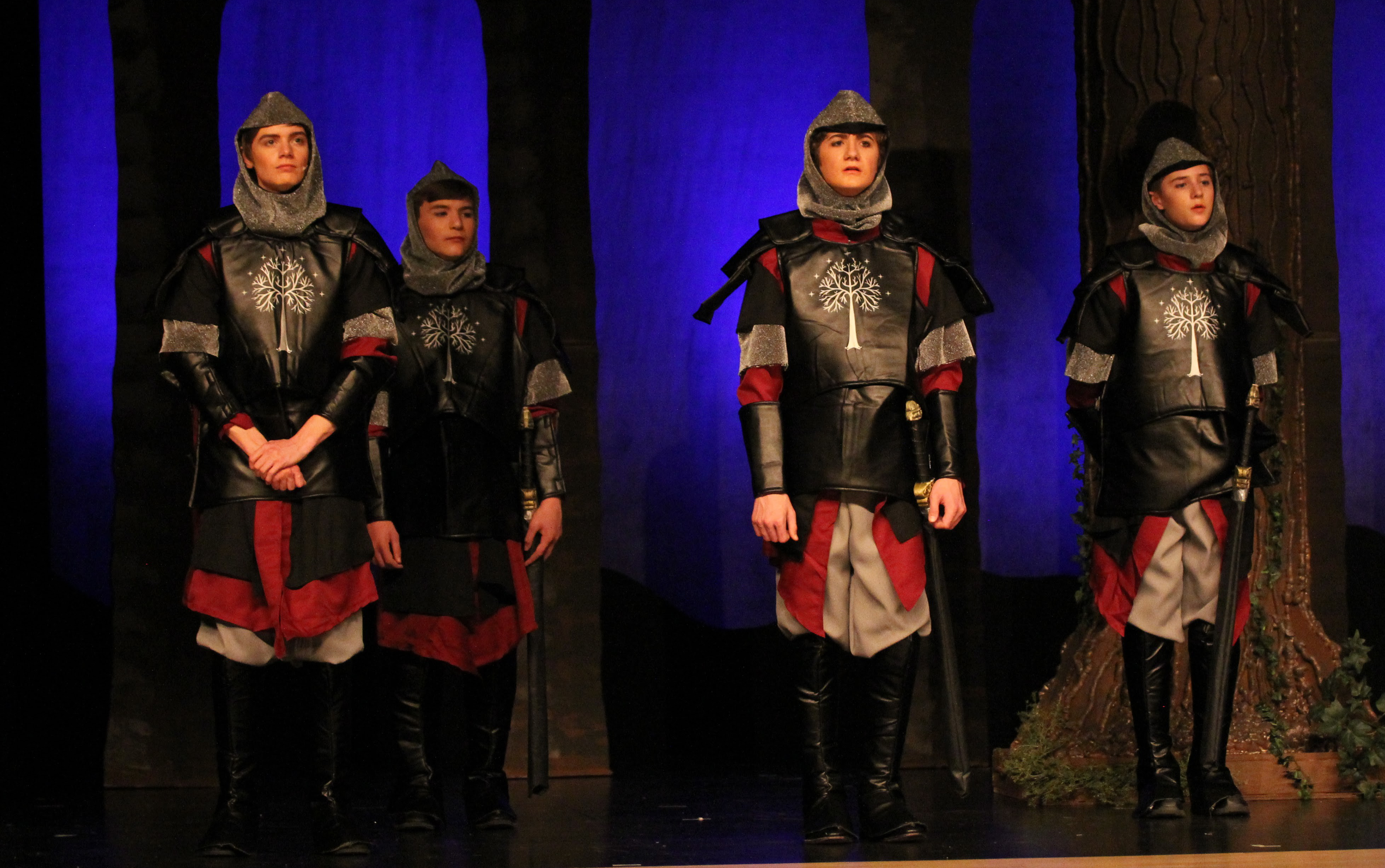 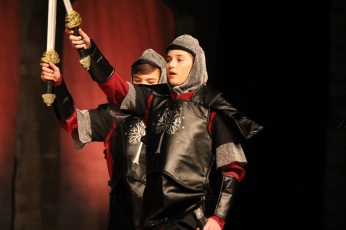 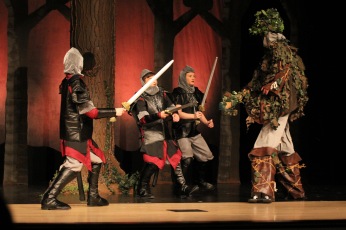 Overall I was happy with these costumes.  I didn’t care for the tree on the front, but, ran out of time to try and cover it with something else (good enough!).  The swords were purchased at a pop-up Halloween store on clearance after Halloween.  The sheaths were made out of vinyl and the Knights had belt from which the swords hung.  I had hoped a sheath was would be optional, but they need to put the swords away after fighting the Giant, and then again in the wedding scene.

The Knights needed a different outfit to wear to the wedding.  We used the same gray breeches, and the white shirts that they wore with their Villager outfits.  Simple white and cream tunics were made out of old bedspreads.  A local screenprinter used a metallic gold hot-fix vinyl to make a rampant lion motif on the front.  The bedspreads were thick enough that they supported themselves at the shoulder. 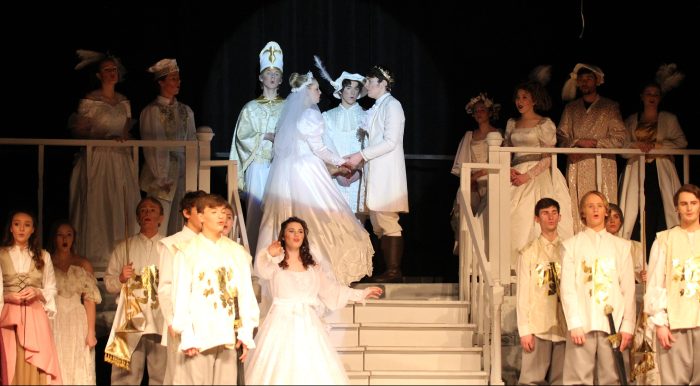 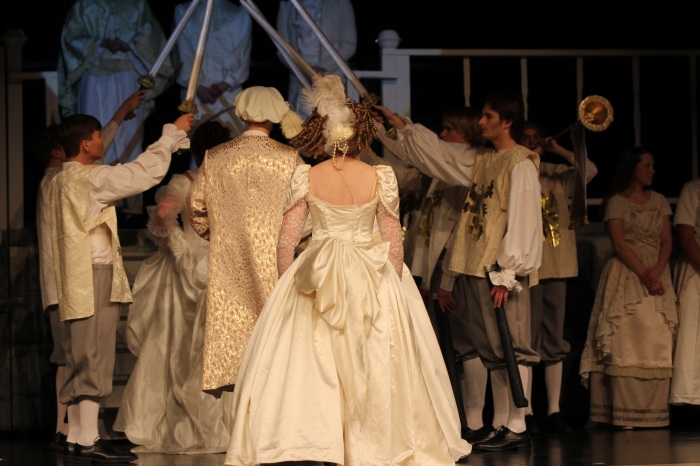 The above picture shows the sides of the tunics.  The tunics were rectangles with a hole cut in the center for the neck and tabs on the sides to hold them in place.  The pages wore matching uniforms for the wedding.

Earlier in the show, the Pages wore different outfits: 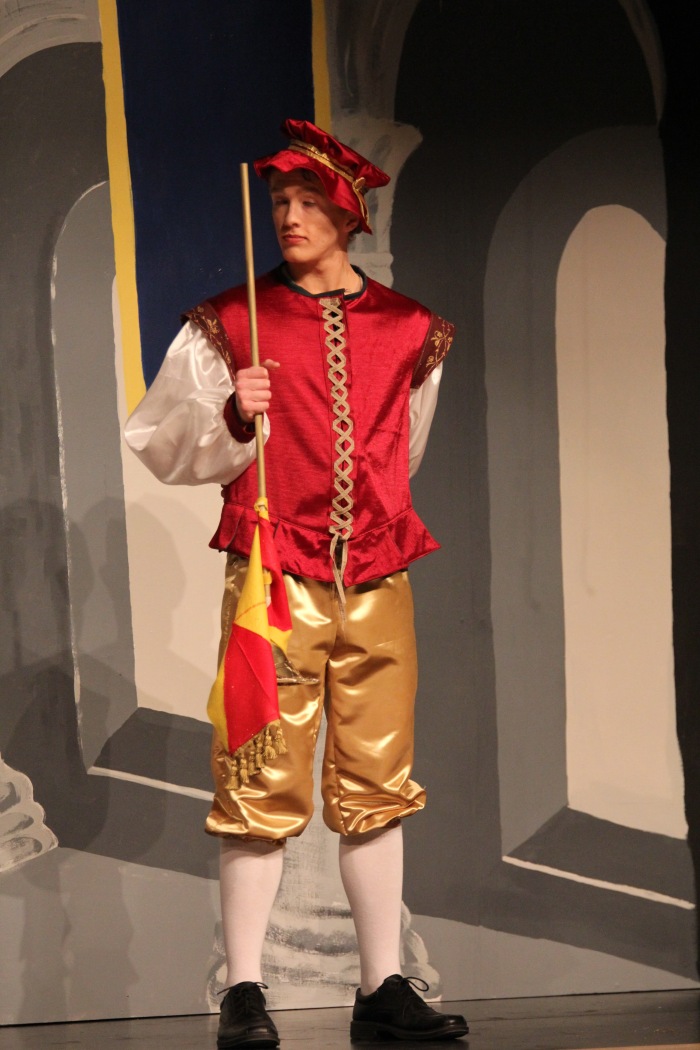 They had gold breeches (which matched Ella’s gold dress).  The tunics were one piece and closed with velcro.  The lacing in the front is mock.  The caps on the shoulders are made of scraps from a tablerunner that was used for Lord Pinkerton.  These were accessorized with floppy hats.  This style hat was chosen because Ella references floppy hats when she looks at the picture of Topher on the gold coin given to Marie.

The “horns” carried by the Pages were made from a dowel,  a funnel, a nail, duct tape, cardboard/foamboard , hot glue and spray paint.  To put them together, a nail was pounded part way into the end of one of the dowels.  The funnel was slipped over that and down over  the dowel.  This connection was taped, and the throat of the funnel filled with hot glue. 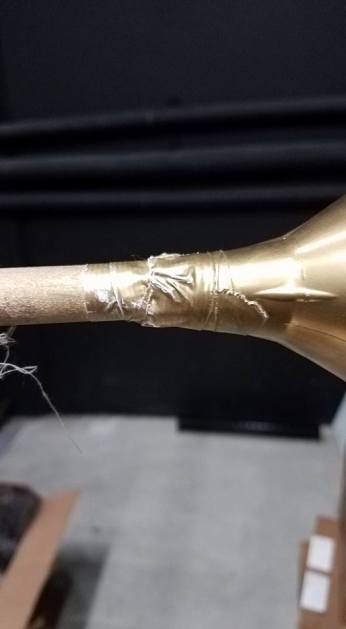 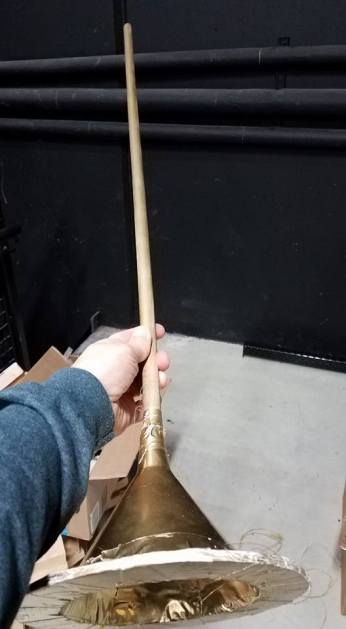 A circle of foam board was cut to match the edge of the funnel and was taped in place with duct tape.  The whole thing was spray painted with metallic gold paint.

Flags were made to hang from the horn.  The red & yellow one is made of felt, and the dowels were rough that they didn’t slide too much on the horns.  The white and gold one is made of satin scraps.  They have the same fringe trim on the bottom. 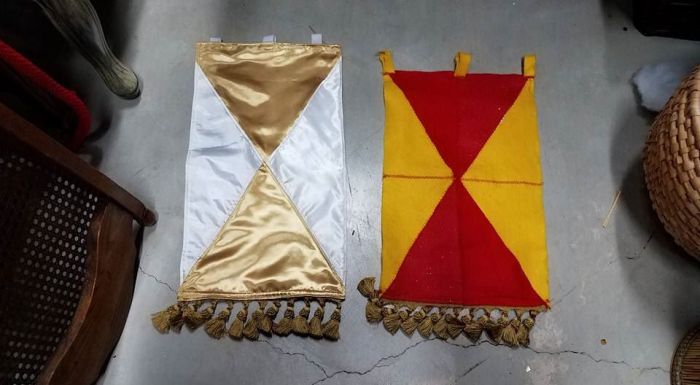 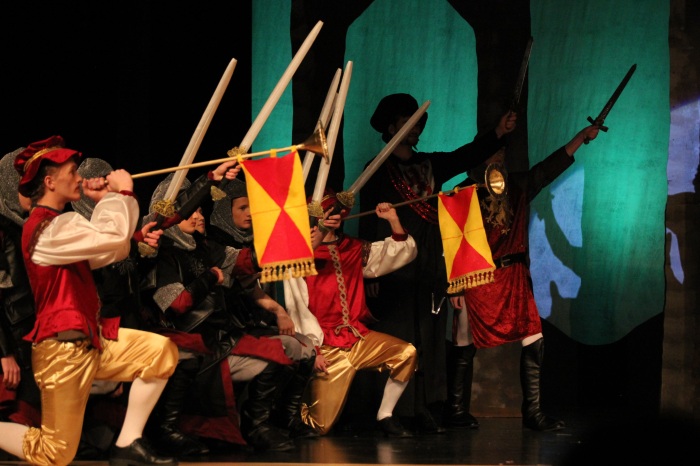 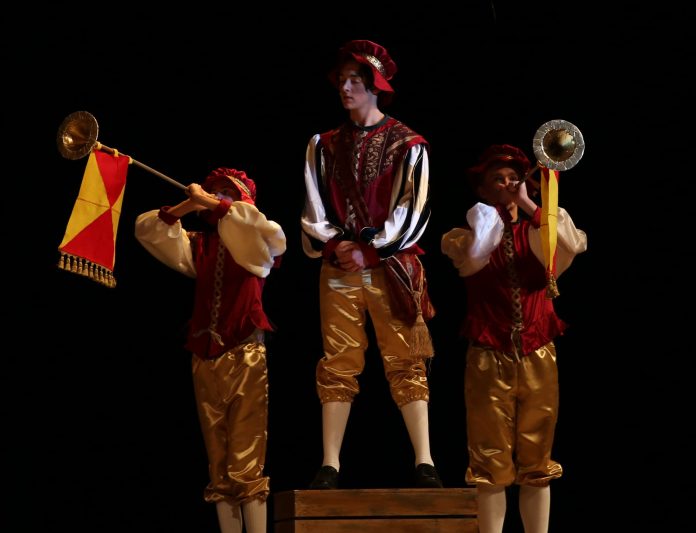 Lord Pinkerton’s main outfit (shown above) coordinated with the Pages.  He wore the same gold breeches and a coordinating-but-fancier tunic and hat.  He also has a satchel/bag.  We found the bag to be necessary because he needs to carry the invitations to the ball.  It was also a handy place to carry his paper and quill into the Throne room. 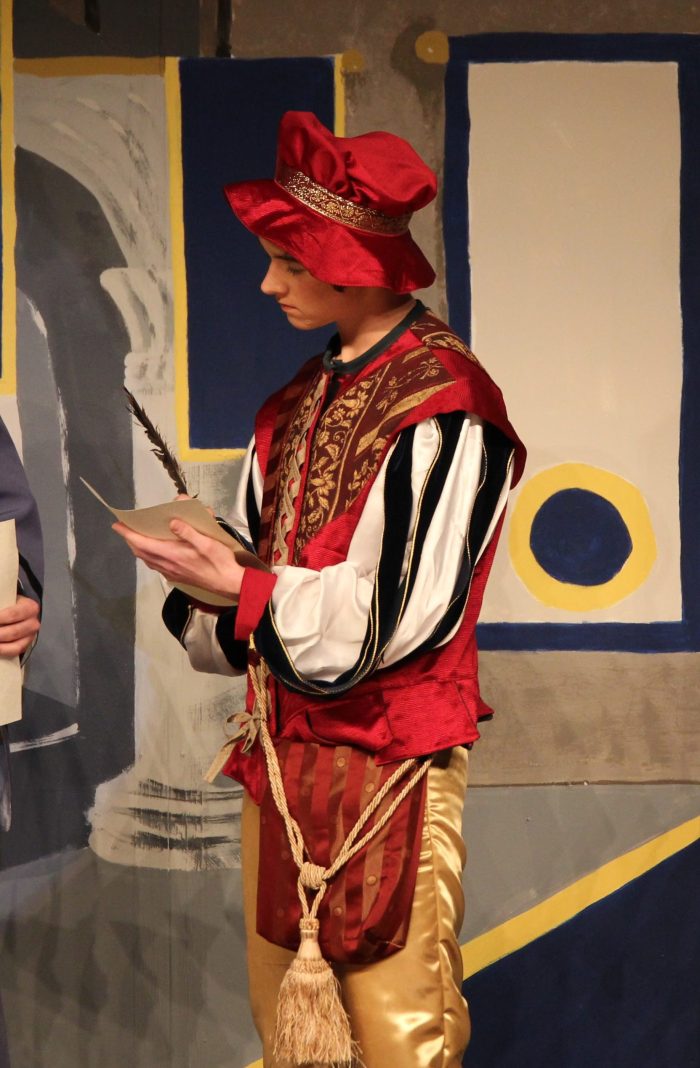 The bag was made from a pillow sham and a drapery tassel.  Pillow shams are a great source of decorated fabrics.  His outfit features more details, including the mock slit sleeves (made from a dark green velour dress–no edge fraying), larger pieces of the table runner and extra gold trim.

I also had a more elaborate outfit for Lord Pinkerton to wear to the Ball. 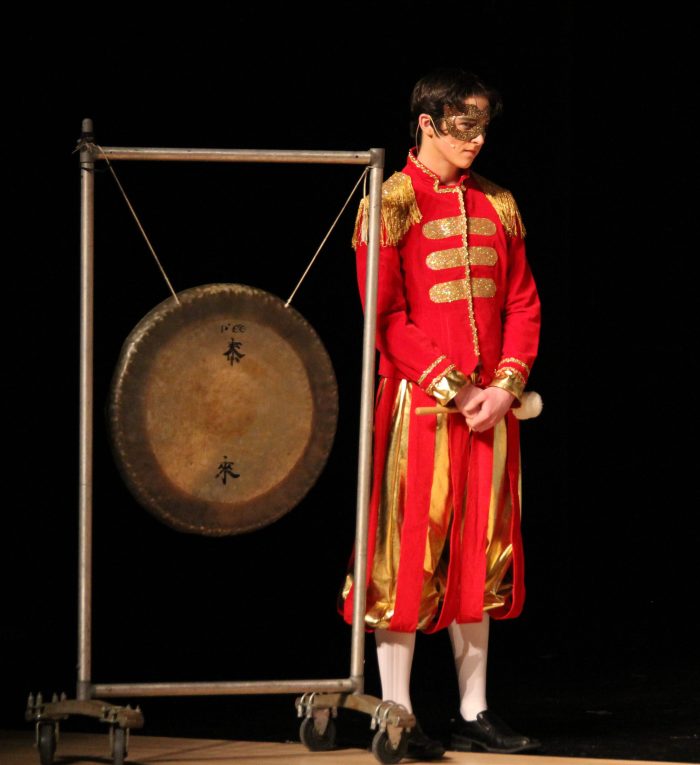 This actually proved to be unnecessary with the staging our Director did.  Lord Pinkerton only appeared at the very beginning of the Ball along with the gong.  I had imagined that he would follow along with Sebastian during the actual Ball, but he didn’t, so this fun outfit was barely seen.  The jacket was remade from the Nutcracker jacket.  The lower edge was unhemmed, the tuck taken in the center back was removed,  and additional gold was added to lengthen the sleeves.

The breeches are made of metallic gold spandex (donated).  The red overlay is a skirt that matched the original jacket.  The skirt was slit and the edges finished, and the strips were attached to the lower edge of the breeches.  I had intended to make him an appropriately ornate Ball-appropriate hat, but, once dress rehearsals started and I realized how brief his time on stage was during this scene, I skipped that.

Lord Pinkerton also had an upgraded outfit for the Wedding scene. 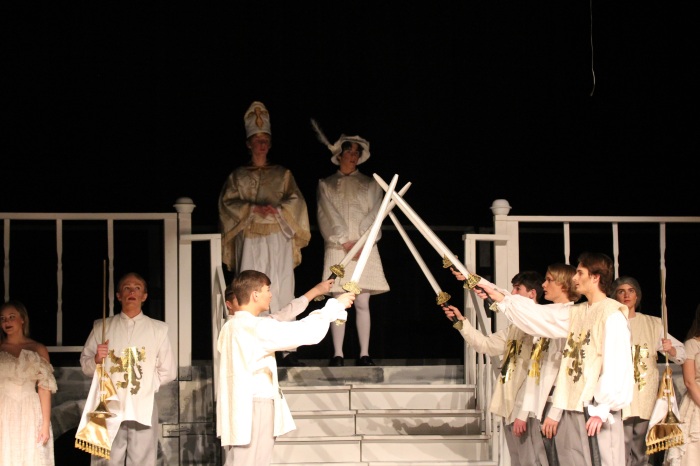 He, of course, had a new white hat that was decorated with a white plume (from the same batch that was used for the rest of the main characters).  The jacket/tunic was made from a white padded bathrobe.  The sleeves are additional satin, and it features a snap-closed jabot.  Ideally he might have had white breeches, but we never got that far, so he just wore it this way. 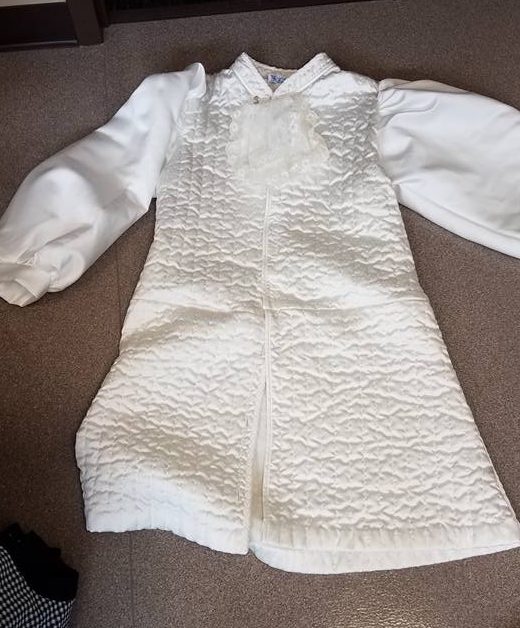 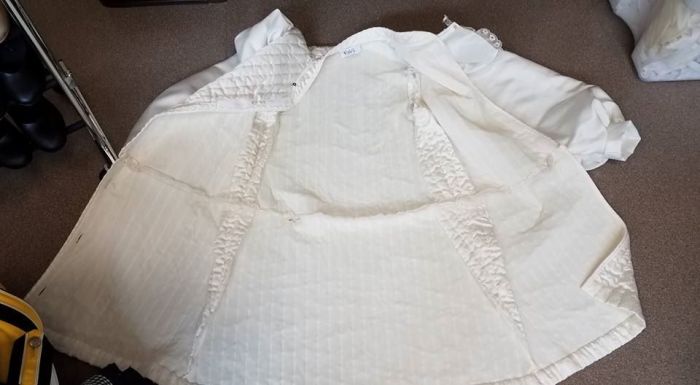 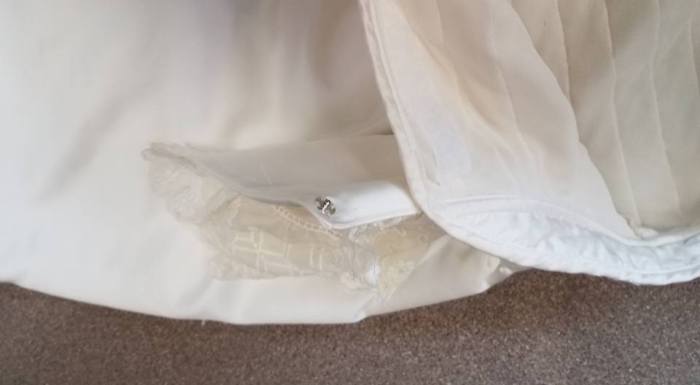 This actually was an acceptable look for him because I had him wear a similar tunic look in the opener.  This was a commercially made costume, combined with the hood and boot covers from one of the Knight costumes. 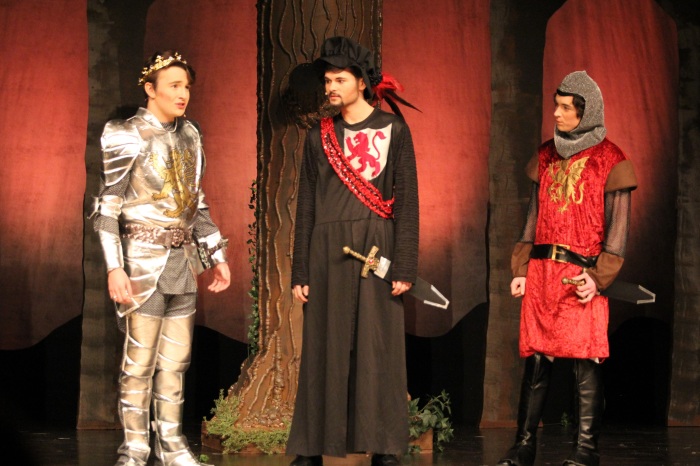 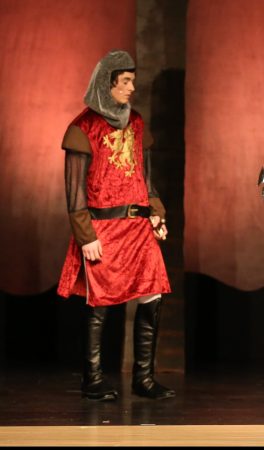 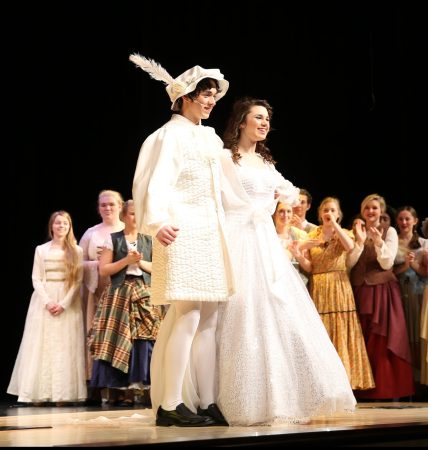 The complete ensemble of Knights, Pages and Lord Pinkerton, along with Sebastian and Topher. 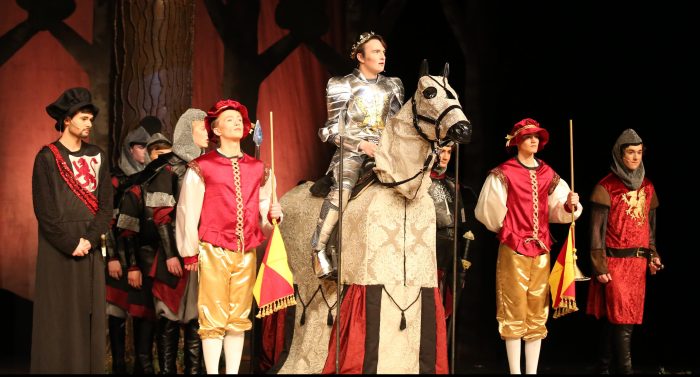