Cogsworth . .that blustering, pompous bundle of nerves.  I love his character and think he has some of the best lines in the show.

Cogsworth is a clock, so I think his costume by definition needs to have some sort of boxy shape. Typically it will have some sort of hat/headpiece, as well as a pendulum.  Variations include how and where to include a clock face.  Cogsworth is rather pompous, so his costume often includes an elaborate curled wig, and decorative embellishments.  One key component in the show is that as the characters are becoming less-human and more Enchanted, Cogsworth gains a winding key on his back . .so that is something to take into consideration.

I did not construct our Cogsworth costume, so hopefully I can manage to do a sufficient job explaining!

The volunteer who created this costume is a wonderful quilter and does marvelous applique work, and so she designed a headpiece that incorporated the face of the clock.

The “frame” of the headpiece is constructed out of plastic canvas.  It is lined, and there is additional batting added in the top to adjust the height to the actors face, as well as make it a bit more comfortable.

The headpiece attaches to the front  and back of the costume with flaps, which are attached with hook & loop tape. 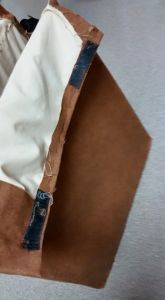 The cast member then added the clock hands to his face with make-up.

If I were going to redesign this costume, I would consider making the clock face an oval, instead of a circle.  Then, the headpiece could be adjusted so that it sat back just a bit more on his shoulders so that his face was a bit more visible.  That said, his face was never really hidden, and he was able to move and sing without impediment.  Another option would be to make the circle a bit larger.  We also could possible have added an elastic or knit strap/headband of some sort that would wrap around the back of the head and hold the headpiece closer to his face.  These are just ideas for possible tweaking if anyone is trying to decide how to make one.

The face of the clock was very visually appealing on stage and quite visible from the back of the theater.  The boxy shape of the headpiece is also reflective of the box shape of the costume piece itself which provides a nice visual representation of a Grandfather style clock.

The costume itself is based on the “sandwich board” style of costume.

This picture shows the costume laying flat on the floor.  The front and the back piece have a thin board sewed into the inside.  The straps go over the shoulders.  You can see the small black pieces of hook & loop tape for attaching the headpiece.  The two side flaps are sewn to the front and attach to the back panel with hook & loop tape.  The front and back are decorated with appliques from the same fabric as the side panels. 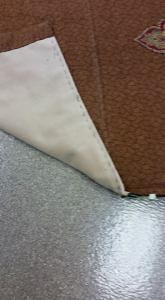 Much of the finish work on this costume had to be done by hand due to the boards in the costume.  This picture shows the back piece.  The thin board stops at the line of stitching, and the bottom part is a soft flap.  How this construction feature came about is kind of a funny story.  The costumer and cast member had multiple fittings together, and all seemed to be in good shape.  The cast member was wearing his costume for one of his first “trial runs” just to make sure things would work . . and all was going well . . until . . .he tried to go up the stairs.

He couldn’t bend his legs.  We all enjoyed a humorous rehearsal as he rocked his way back and forth to try to get up and down the stairs . . I think in the end he stood at the bottom and looked longingly up at the rest of the characters.  His costumer took his outfit home and did a little fixing!

This show was one of our first efforts at doing our own in-house costuming, and we learned a lot.  Knowing what your character needs to do onstage, and how that affects the costume is important from the outset .  . . and even then, you can’t always envision how they will interact until the time comes.

The key on the back was made out of several layers of plastic canvas covered with silver fabric.  There is extra plastic canvas glued to the outside as rehearsal proved that the piece needed some extra stability. 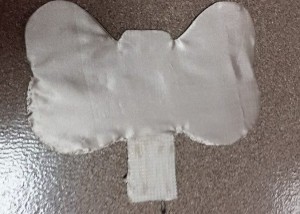 The costumer created a slit in the back of the costume. 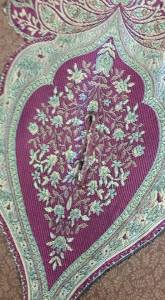 And the key inserts into that, and is held with a corsage pin.

The pendulum is suspended behind a piece of clear tablecloth vinyl.  It is able to swing back and forth.  The base is a wooden Christmas ornament shape painted gold.

This is a good side view where you can see the key and also the bottom of the back of the costume. 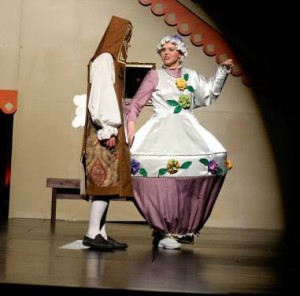 For the rest of the costume he wore a pair of brown breeches (not visible) and a cream peasant style shirt.  These two pieces were used for the Human costume as well.

The transformation to Human Again involved removing his outer clock costume and headpiece, removing the clock makeup, and adding a brown tunic (made from the same fabric as the main clock). 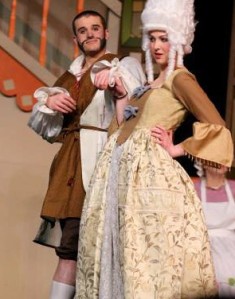 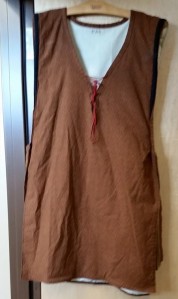 The tunic had a self-fabric tie at the waist, and lacing details at the top.

Here are a couple more pictures of the costume being worn in the show:

And finally, here is a video clip.  I wish the video were a bit more zoomed in, but it gives you an idea.