And here we are . . . on the last of seven variations on a theme.  This post is a little sketchy–so if this is the first one you are reading, and it seems like I am skipping a few steps, I suggest you could look at the previous posts in this series.  Not only is this the seventh variation on a theme, it also my least favorite outfit.  However, I think it is worth talking about what didn’t work, because I sometimes learn more from the mistakes I make than the successes.   There really isn’t anything wrong with the outfit, I just think it looks like I tried too hard.

As with several of the other costumes, I began with a circle tablecloth. 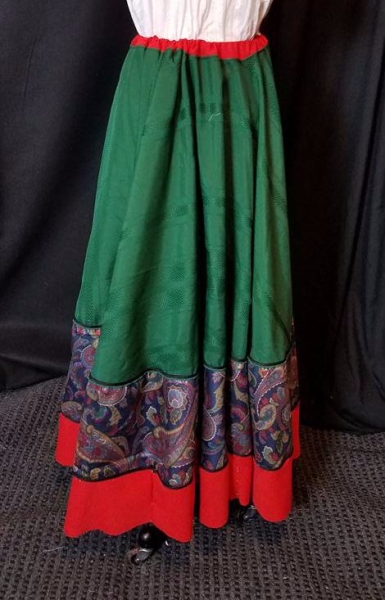 Using the same fabric and trims in different outfits helps to give a cohesive look to a group of cast members.  I am not a fan of extremely matchy-matchy outfits, instead opting for variations on a theme, and using some common design features like color, trim, style, etc.   I chose to make the waistband out of the red fabric because I thought I was going to make the waist corset red.  However, I didn’t, so that decision rather backfired.    Instead, at the time, it seemed like a good idea to make it out of the same fabric as the border.  I used premade button-loops for the lacing.  The red is a rattail cord.  The waist corset was spliced together in multiple places (about every 4″) as I had to cut it out of the left-over scraps from cutting the border.  That turned out fairly well, and you can’t tell how spliced it is. 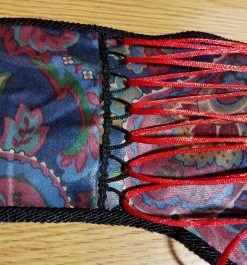 The blouse began with a plain white top:

The top is a soft knit.  It has elastic around the neckline and sleeves.   I think it would work as a “good enough” top without upgrading. 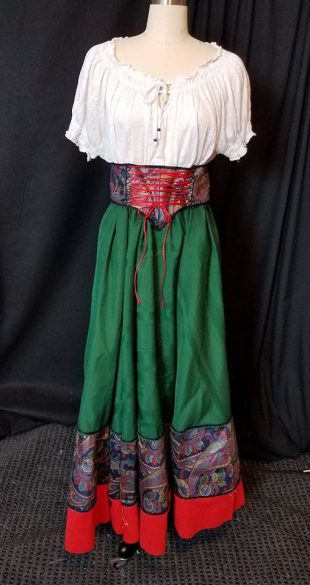 However where is the fun in not upgrading?  So, I added some wide lace and green ric-rac.

I made an apron out of a piece of bedskirt.

And the outfit was done: 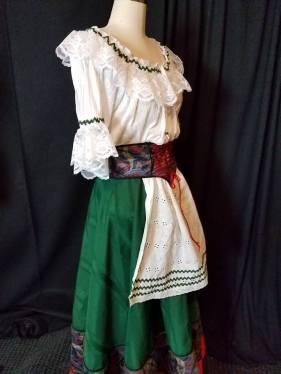 The stretchy neckline allows it to be worn on or off the shoulders.

Would I have liked it better with a red waist corset?  Perhaps.  It might have helped to make the bottom of the skirt less distracting.

At any rate . . . there you have it.   Seven variations on a theme . . finished over the span of 24 hours (with some time out for sleeping).