The second dress that Baroness Bomburst wears comes with these lines:

Your Director may or may not choose to emphasize these lines, and your costume choice may be affected by that decision.

I was basing my costume knowledge on youtube videos . . . so I just made a “variation-on-a-theme” partial costume change for the second appearance of the Baroness.

Remember that two piece sequin dress I rejected for Costume #1? 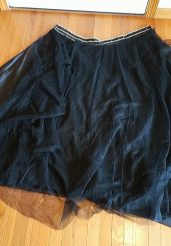 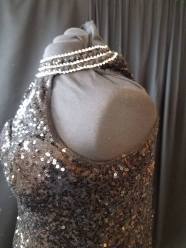 I REALLY loved the beaded trim, and since I’d ripped the zipper out of the back, I wasn’t quite willing to let it go.

I decided to make it into an “overlay” or “apron” to provide an alternative look for the second appearance of the Baroness.

I detached the back “racer” portion of the dress from the neck trim.  I added elastic to the back of the neck and closed it with a kam snap.

The detached “flaps” moved down to the waist and secured with hook and loop tape. 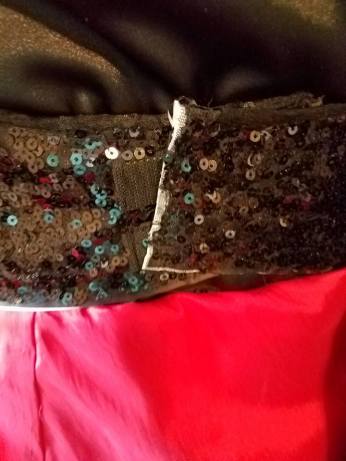 The detachable skirt was draped over the neck.  It was stitched down on one side of the sequin dress, and closed on the opposite side with a strip of hook and loop tape.  The corset tie from the red dress was divided and stitched to the neckline to tie the skirt at the shoulders and form a cape. 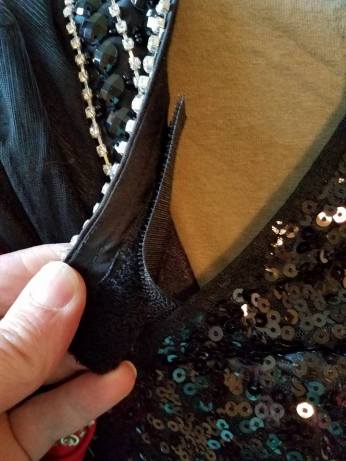 I added some tucks along the open sides to shape the dress and create the rounded, draped look of a bustle-era dress (holding my shaping in place with safety pins).  For a little bit of discord and over-the-top visual interest I added a row of fringe along the bottom. 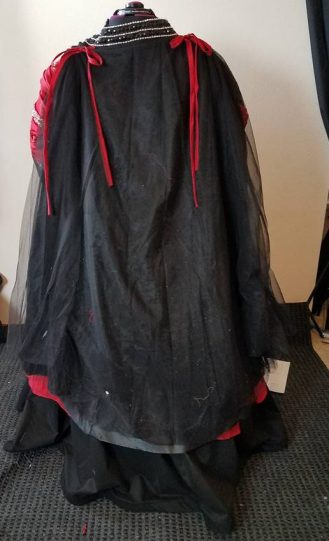 It is the same dress (is that cheating?) but,  I thought it looked enough different that it would work–and would the audience notice?  or care?  The cape nicely hides the edges and back of the overdress.  It would be quite glittery on stage.  I liked the way the lines of the beaded trim looked as well.  I sent them off to my sister, feeling good about my efforts.

Then my sister messaged me and the conversation more-or-less went like:

And then she explained the context and the script, and that they wanted a dress that was obviously revealing but not too revealing.  So . . that led to a lot of back and forth discussion about what IS revealing?  And does it need to be 2018 revealing, or historical revealing?  This is youth theater, after all.

I dug through my boxes and my sister ended up picking this bias cut black satin nightgown (picture messaging is a wonderful thing). 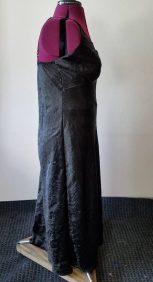 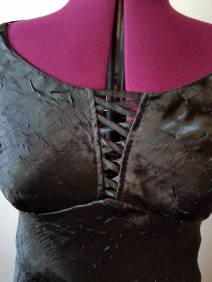 It had a number of good things going for it.  It had the front detailing with the open corseting with a modest neckline . . so hints of revealing.  It also had a slim bias cut, which in opposition to the previously hooped and exaggerated first costume.  I voted for skin tone mesh in the front, my sister voted for red, so she won.  She also thought the top needed some sort of sleeve to make it a little less nightgown-y.

The first thing I did was stitch some red fabric behind the corseting on the front of the dress. 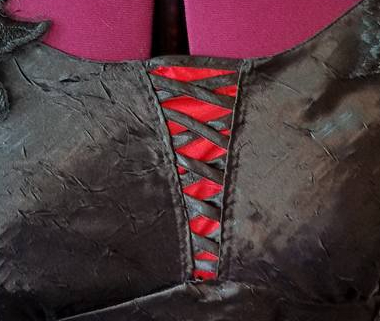 And then I got stuck.  I kept running into the dual problems of Vampires and Regency.  Half the things I tried made the dress look like a Halloween costume, and if I added short sleeves–especially short puffed ones, it looked like it belonged on the front of a cheesy (Vampire) Regency romance paperback.  I thought about adding gored inserts to the skirt, but wasn’t convinced that would help.

I really thought it needed a bit more “reveal” and eventually I decided that a slit would do the trick.  If we go with historical “reveal” . . . showing off a leg, even to knee height, should be titillating enough.  If the Baroness sticks her leg out the slit and Grandpa sticks his nose to her knee . . the line ought to come off as intended, and get a good chuckle from the audience.

So . . . the third costume that the Baroness needs is for the “Choochie Face” song.  I had sent a black nightgown and robe set, along with some red feathers, to be remodeled into her costume.

This is an awful picture, but the front of the nightgown is sheer lace, which should look good worn over a red top, or even just a body leo.  I envisioned several ways to upgrade this, shortening either and/or both the robe and gown, and then adding the feathers around the hem of the robe, or the neck, or the sleeves.  The point of this digression is that feathers were already going to be a part of one of the Baroness costumes . . . and feathers say “sexy” viva Las Vegas showgirls . . .

The skirt was very soft and bias cut, and I was afraid that it would stretch with the weight of the feathers.  I marked the location of the top of the slit, and then bonded a strip of scrap black fabric from the hem of the nightgown all the way to the under-bust seam (to help provide support).  I then cut the slit to the desired height. (The white is my non-stick pressing sheet –love this thing).

Inexpensive black feather boas were pinned to the dress.  I pinned them higher than the actual slit to give the visual illusion that the slit goes much higher than it actually does.  Feathers also solved my problem of what to do about sleeves.  I cut the left over boa into two pieces, and pinned them, along with some black lace/rhinestone appliques, to the straps.  (These could be stitched once the straps were adjusted to the correct length). 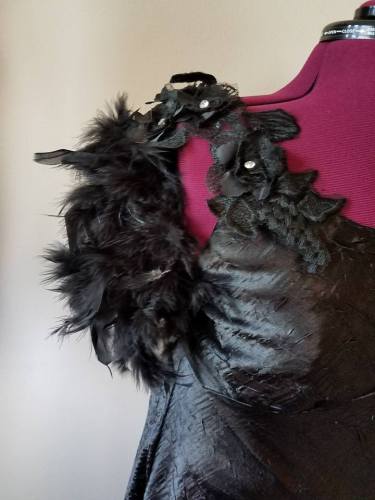 I thought the dress needed a little bit “more” on the skirt, and added some sequin appliques above the feathers, and some swirling lines of string sequins to the side of the slit.  My hope is that when she shifts the dress as she sticks her leg out the slit, the sequins will help draw attention to her movements.  I traced swirls on the skirt with tailor’s chalk, and then appliqued string sequins. 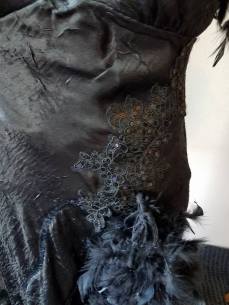 I thought the top looked good, bare, but not too bare.

The skirt gave the illusion of risque exposure (shown with a “place holder” to emphasize the slit).

And the dress was done: 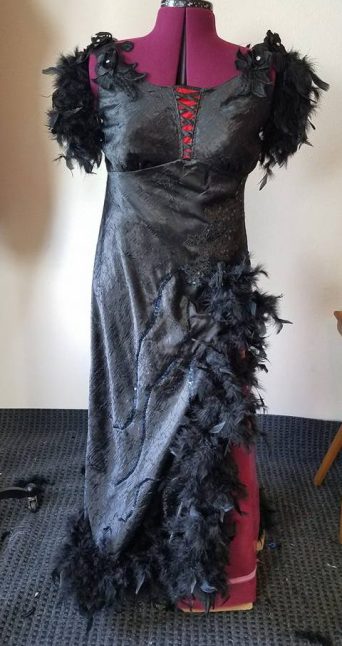 Here is another look at how the extended feathers make the slit look higher:

I think this would look great with some fishnet tights, or even red tights, or maybe red sparkle/metallic leggings.  Tall boots, or hightop shoes/spats might be good too.  In  retrospect, some red sequins might have been nice on the skirt, but then again, the tiny bit of red does draw attention to the neckline.

What I really like about this costume set is that the changes in style, shape and silhouette create the illusion of sexy, without the costume itself being overtly “revealing”.