The third Bombie Samba back-up dancer dress began with another one of those “gotta buy it” perfect base dresses. 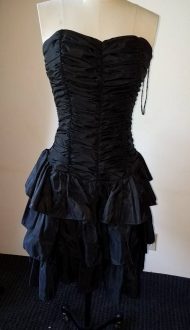 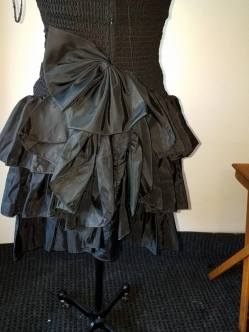 This is probably a late 80’s/early 90’s black taffeta ruffled party dress.  It has a boned bodice, a reasonably modest neckline, and a stretchy back which is great for flexible sizing.  It has three tiers of ruffles in the skirt, and a dropped waist in the front.  It is very Samba-looking already.

The back ruffles raise up in the center back, giving it a bustle-feel.

This was a very easy (if not monotonous) upcycle.  My plan was to jazz up the dress by adding red lace ruffles.  I began by marking the stitching line.  I do this because once I get the dress crammed under my machine, it is easy to lose where I want to stitch.

I measured down from that to about half-way down the next ruffle, took that width, and cut many, many strips of red lace.  Then I squish gathered it quite generously in between all of the ruffle layers.  Tedious, but not hard. 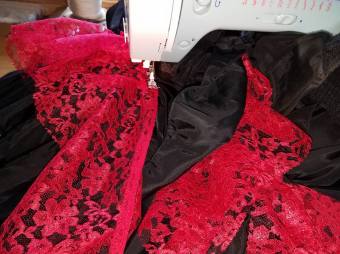 I cut a longer piece to stitch to the back section to make a “low” part of the hemline so that it had the same hi-low feeling as the other dresses.  I’m not sure how I like this, but, if it doesn’t look good on stage, it is easy enough to cut off.  The lace does not fray, so no hemming or edge treatment needed. 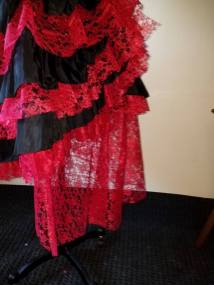 For the neck/sleeves, I cut two widths of lace, one of black and one of red, with the black being several inches wider.  I finished the long edges with fishing line.  I ran a row of black bias tape down the center for a casing and marked the center so I could find it. 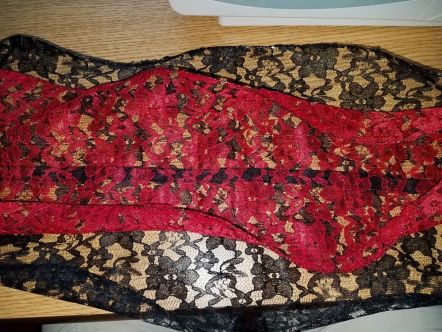 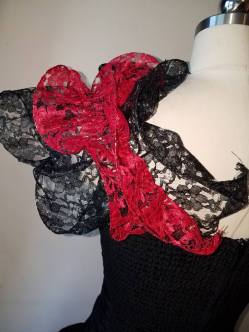 Then I threaded black elastic through the casing, and tacked the center of the neck piece to the center front.   For this project, I just pinned the straps in place as those can be adjusted once a fitting is done. 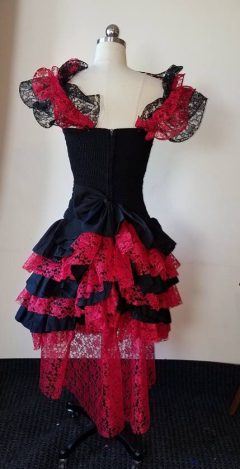 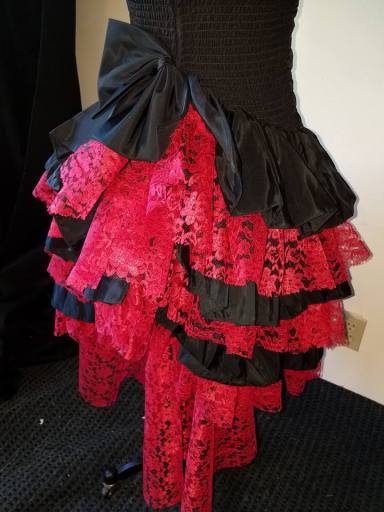 I opted not to add any sequins on this dress.  I thought that the layers of ruffles were pretty elaborate already, and as a chorus dress, it didn’t need more embellishment.  If this had been the dress for the Baroness, or a stand-alone dress, it certainly could have been decorated with string sequins in lots of places, and an embroidered motif (similar to the Baroness dress) would have looked good too,

The lace came from tableclothfactory.com, and a 15 yard bolt was about $35, so that’s just a bit over $2/yd.  For that price, I could use a lot of lace!  I ordered red and black, and shipping is reasonable, especially if you are ordering several things.  I could also have cut strips of this to use for the black lace on the  Baroness dress had I had a clear vision of the whole project before I started and/or even though about that as an option :).    This company also has lace in 25 yard lots.  The ones I ordered in the past were more suitable for gluing than for sewing.  One in particular the edging on the organza comes apart easily.  However, the selection seems to change, and some are better than others, depending upon your use.