The next dress to reach the chopping block was a blue sequinned tulle ballgown Prom dress that I picked up at a thrift store in the Halloween section. The top layer of tulle had a few rips in it, which is probably what accounted for the low price.  However, there often seems to be no rhyme or reason for why things are priced the way they are, so, who knows?

The dress is between the sizes of my dress form, and my phone camera was acting up that day (I have ordered a new one . . .killed me since the phone part works just fine and it is the camera focus that has worn out, but, I finally caved).   So, I apologize in advance that the pictures are not the best in this post,  but, you will get the idea.

This project was done with no clear end vision in mind.  I picked this dress to do because it is huge, heavy and was taking up a ton of space on my rack.  Getting it done means I can take it to school and free up some space.  Unfortunately, I didn’t have anything that really matched with it, so I just decided to start and see what happened.

This is the original dress:

The first thing I did was carefully cut the top layer of tulle off.  I love the sequins, but they scream “Prom Dress” to me.  The dress looked amazingly different with just this small change:

Early on in the idea process, I had decided that a certain amount of bling would be OK for these dresses.  So many Prom, wedding and other formal dresses are dripping with glitter and jewels, and to try and eliminate it completely would be almost impossible.  That isn’t to say I might not try to tone it down, or reshape it into a less modern look, but, glitter is good.  And, after all, this IS a Fairytale, and what is more magical than a sparkly Ball?

That thought aside . . . what about an underskirt?  I dug around and found an old dance outfit with wide silver legs.   The fabric on its own is a bit much, however,  I had a dress donated that has a sequin skirt that is covered with two layers of soft mesh tulle.  I was amazed at how the layers of tulle dissipate the modern and somewhat harsh look of the sequins, yet still allowed the glitter to shine through.  I decided to try something similar.  This is a single pant leg pinned to the dress to check out the idea. 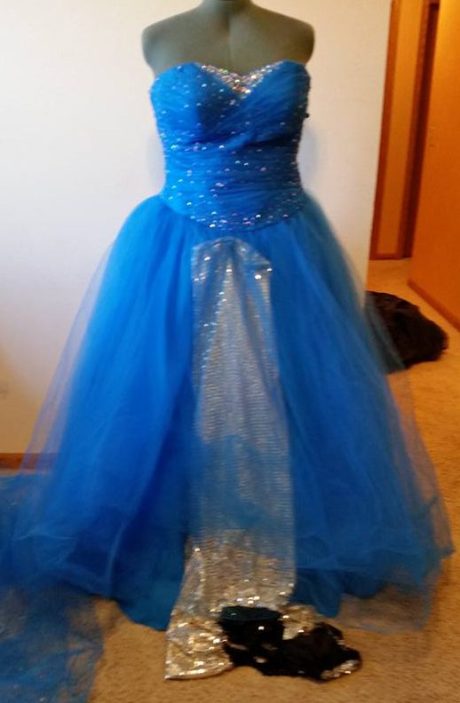 I thought it would work.  I cut the pants off the top, and then opened them along the inseam.  Then I did some cutting and splicing. 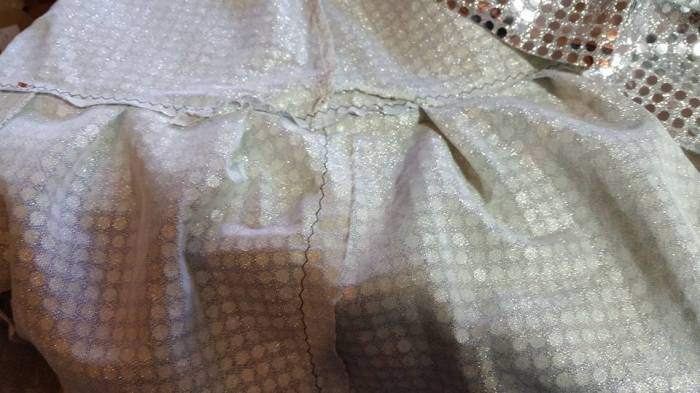 I reinforced the top with some bias tape:

And attached the “underskirt”. 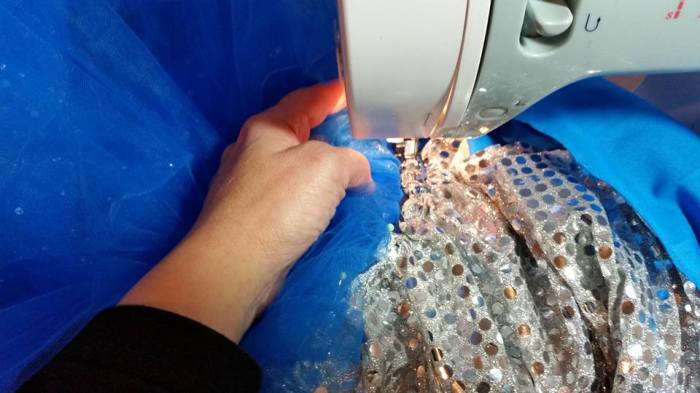 I pulled the original skirt straight and pinned the underskirt to it in about four places and tacked it down just a little bit in those spots.

On to the sleeves:  I thought about making silver sleeves, but that seemed a bit much. I decided to try and use the discarded tulle/sequin layer.  I used twill tape for the base of the straps.

I covered the pieces with the remaining scraps from the dance outfit.  I roughly measured the sleeve opening to begin the process.

I was having a bit of trouble coming up with a plan since I don’t have any fake arms, so my daughter obligingly played dress form for me.

We manipulated the tulle until we came up with a look we both liked.  She is a good litmus test of teenage approval 🙂 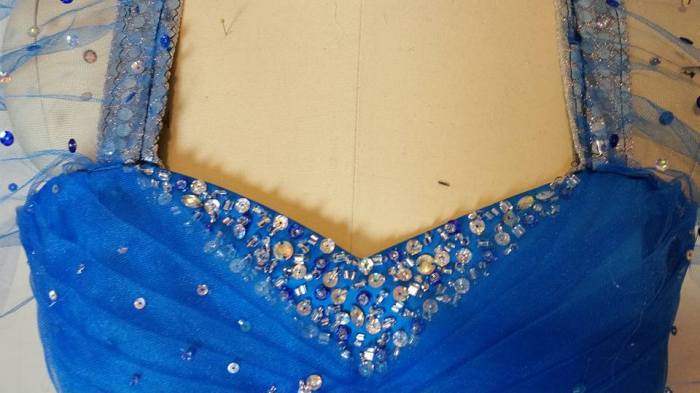 I divided the skirt piece in half, and then cut off the ripped part, and adjusted the second one to match.  I ran a gathering thread along the edge with the sparkles.  The tulle is then poofed a bit, and pulled to the back, and tacked to the shoulder straps.  The straps will be secured after a fitting is done.  I opted to leave the corset-back in place.  For this particular show, I believe there will be adequate time for the chorus members to change clothes without the corset closure being a time issue.

The tulle is sewn on to the far side of the strap to the strap is covered by the tulle.  Again, this helps to tone down the shine.  It is topstitched so that it doesn’t itch.  Sewing on this confetti dot sequin stuff is a pain.  If possible, try to avoid sewing the dots, and if you have to, watch your needle for build up of goo, otherwise your thread will break at inopportune times and/or you will start skipping stitches.  If anyone has any tips for working with this miserable fabric, I’d love to hear them. 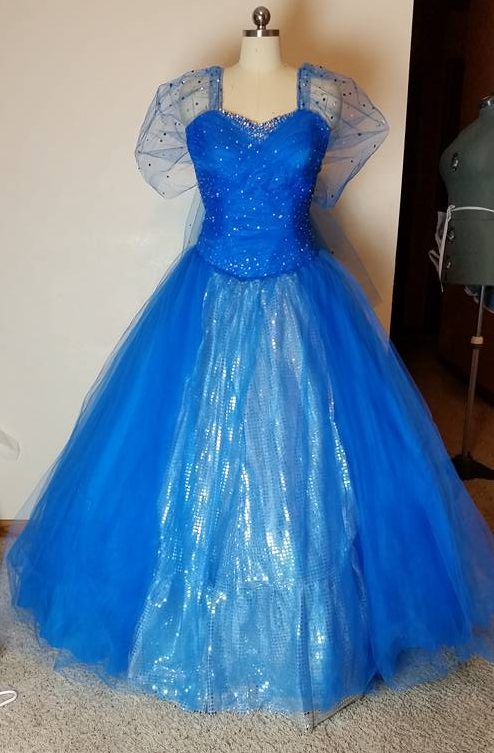 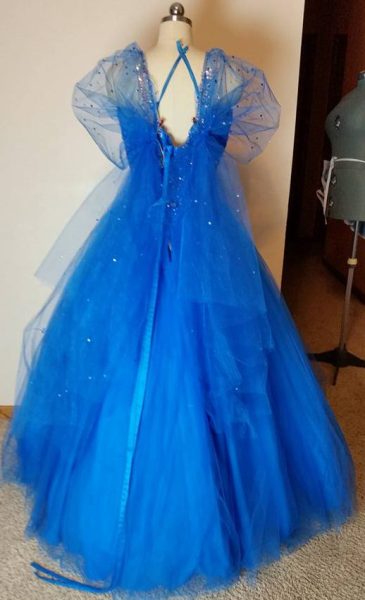 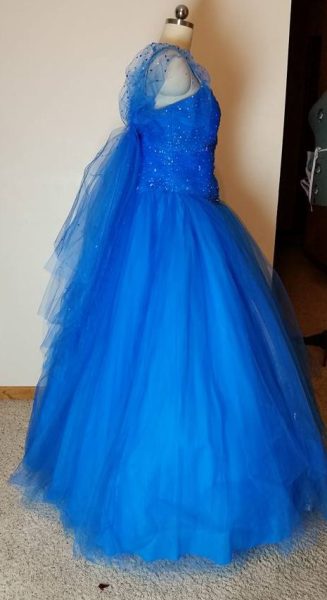 (The dress is supported by the hanging loops in the back for display purposes.)  We just opted to let the rest of the tulle hang down the back for a little touch of “drama”.

Overall I am happy with this dress.  My daughter thinks it looks like a fancy version of a “Belle” dress.